The Hungarian 28M is a licensed variant of the Auer GM24. It was issued to the Magyar Királyi Honvédség (Hungarian Royal Army).

It is a full face mask made of rubber-coated light brown canvas. The eyepieces are in metal assemblies with antifog insert fixing ring. The harness uses a three-piece adjustable harness, an additional strap near the bottom would be wrapped around the user's head and hooked around to provide a tight seal. There is a carry strap on the bottom back. The valves are in one green painted metal piece. There is an M2B marking on it meaning Mercur 2 Budapest. The exhale is under of the 40mm intake. Unlike the Cold War Hungarian masks, the size 1 is the biggest and size 4 is the smallest.

The 28M filter (which is also identical to the GM24 filter) is a big flat canister filter connected by a hose to the mask. At the end of the war the mask was issued with the 34M filter.

The bag is a bit unusual. It looks like two bags sewn together made of tan-colored canvas with one strap for carrying on the shoulder. The smaller flat part is for the filter while the bigger one is for the mask itself. Later in the war, the mask was also used with the 34M bag and with the 42M box.

The kit originally costed 113 Pengő, later this changed to 50 Pengő in 1934 (the mask was 21 Pengő) but it was still double as expensive as the 34M (25 Pengő). In 1940 it worth just 39 Pengő, but despite the constant degrading in price it was always more expensive than any other mask. This is due to the fact that it was licensed and used parts that were not optimised to the Hungarian economy. 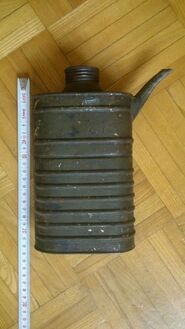 28M filter converted to oil can.
Add a photo to this gallery

Retrieved from "https://gasmaskandrespirator.fandom.com/wiki/28M?oldid=43895"
Community content is available under CC-BY-SA unless otherwise noted.