This article is about the civilian respirators. For the firefighter gas mask, see T. gázálarc/33M tűzoltóálarc

The 33M was the first civilian gas mask Hungary.

The facepiece is composed of two rubber-coated tan-colored canvas sheets formed by 4 seams, one on the nose area and between the eyepieces and two on the temples. It seals on the face via goat leather verge and the sewing is sealed with a thin rubber stripe on the outside. The shatterproof (it is composed of two glass layers and a thin sheet of cellulose between) glasses are crimped to brass assemblies which are pressed to the faceblank permanently, these assemblies are chemically treated giving them a thin black protective oxide layer. The 7 pointed, adjustable and elasticated harness is composed of two pieces and sewn to the facepiece. The 3 forehead straps are sewn together on top of the head from where a single strap leads to the back where it is connected to a buckle, just like the two temple straps. These buckles are sewn to a pressure reducer leather sheet. The second part near the bottom would be wrapped behind the neck of the user and hooked to the mask on both side to provide a tight seal and to prevent accidentally taking off the mask, the carrying strap is sewed together with this. The 40mm aluminium intake is placed on the front of the mask and was taken from the Ipari álarc, while the brass exhale valve housing is under the left eyepiece, the exhale vale itself just like on many later Hungarian masks is tulip stlyed. Unlike the Cold War Hungarian masks, the size 1 is the biggest and size 3 is the smallest. 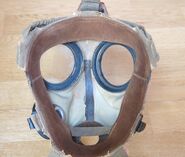 KÁB stamp dates the mask to 1935. Size 2 and the Hungarian coat of arms.

11045 mask number and XIX is the serial number.

The base of the mask is the same as on the 33M. However the eyepieces and harness system are different. The eyepieces are made of celluloid and permanently placed in pressed raw metal assemblies. The 6 pointed, adjustable and elasticated harness is composed of two pieces and sewn to the facepiece. The 2 forehead straps are sewn the strap which leads to the nape where, alongside with the temple straps, each connects to a buckle, which are sewn to a pressure reducer leather sheet. The second part near the bottom would be wrapped behind the neck of the user and hooked to the right side of the mask to provide a tight seal and to prevent accidentally taking off the mask, inside the there is a chinstrap as well. It lacks any exhale valve and the filter connection is clamped inside the mask unlike on the 33M, on which the clamping is on the outside.

The filter comes in a cylindrical canister with a cap and sticker sealing the bottom. Very similar to the 34M filter but not the same.

The bag is similar to the 34M bag, made of canvas with a leather bottom. The little pocket inside the bag is for the anti-fogging soap. 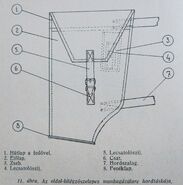 KÁB stamp on the lid.

Mask size on the bottom.

In the early 1930s the need of a civilian gas mask emerged because of the many little wars around the world and the fear of the modern warfare tactics. Mercur Műszaki és Vegyipari Rt.being the only gas mask manufacturer in Hungary probably examined foreign models to draw inspiration from them. So not surprising that the 33M for the first look is structurally very similar to the Auer and Degea 700 series masks but despite the fact that Mercur bought the 28M license from Auer the harness connections and filter intake is rather resemblances the Dräger Gasmaske 200 while the facepiece shape is the own patent of Mercur. It is composed of two sheets because the chin-seam was abandoned. This resulted in 30% less used material and it doesn’t have seams on the forehead part making it more comfortable, according to the patent. The other own developments were the eyepiece assemblies because the already available 28M one and other foreign designs were probably deemed difficult to manufacture. These attributes were incorporated with the already available machines which were made and purchased with the 28M license. Thus, the first both Hungarian designed and manufactured mask was born.

After July 1, 1938, it was not allowed to sell the 33M, so probably the production stopped before this date, estimated production number was around 50000. The 33M P saw even less service because first in 1935 the 35M and one year latter the 36M was constructed. Both were simpler and cheaper to manufacture.

Figures for the patent.

33M called as 2.A in an Italian brochure, note that the exhale valve cover is different than on the usual ones.

Despite that the mask is rather unknown it has a great impact on the Hungarian gas mask designing. The design style, eyepiece assembly, strap system and used materials are very similar (with little differences) on the later 34M, 67M, 75M and Ipari teljes álarc. Some of these masks were even used in the 1990s.

The 33M was meant for the active part of the population and was called M. gázálarc (Munka gázálarc - work gas mask) after 1936. Official bodies, bigger companies and towns purchased the masks for their civil defence workers, however the self protective staff of house blocks had to buy their own gas masks. It was mostly phased out by the 34M by 1938 but was used till 1945.

Private individuals could purchase both the 33M and 33M P on the above mentioned price from Mercur directly or from an official reseller. 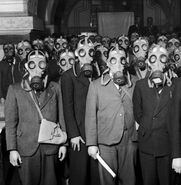 Civilians on an air raid training, 1935.

33M P being tested by civilians on the countryside in Sárköz, 1935. The shorter 33M P filter and the flater eyepieces are clearly visible.