The Hungarian 34M was designed before the Second World War and was used until the end of the 1990s in some form. Originally it was issued to the Magyar Királyi Honvédség (Hungarian Royal Army), Légoltalmi Liga (predecessor of the Polgári védelem - Civil Defence) after the war to the Magyar Néphadsereg (Hungarian People’s Army) later it was also used by the Polgári védelem (Civil Defence).

It is a full face mask made of rubber-coated light brown canvas (darker or greener canvas was used as well and some Post-War models uses the 67M styled green canvas) and seals on the face via goat leather verge. The shatterproof (it is composed of two glass layers and a thin sheet of cellulose between) glasses are crimped to copper assemblies which are pressed to the faceblank permanently. The harness uses a three-piece adjustable harness hooked up to a small leather center-piece the straps are bolted onto, an additional strap near the bottom would be wrapped around the user's head and hooked around to provide a tight seal. There is a carrying strap on the bottom back of the mask. The valves are in one dark olive green painted aluminium alloy piece. The "tulip" styled exhale valve is on top of the 40mm intake (the thread is very loose, GOST filters can easily fit in and seal with the mask) covered with a threaded grid. Unlike the Cold War Hungarian masks, the size 1 is the biggest and size 4 is the smallest. 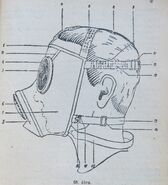 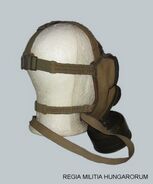 Dimensions of the sting.
Add a photo to this gallery

Big flat box filter with grooves on the side. The firefighter filter was multi-purpose and painted red with a capital T in white frame, the other industrial ones were painted with the appropriate colour for the protection type.

The 34M filter comes in a cylindrical canister with a cap and sticker sealing the bottom. The filter was redeveloped in 1941 hence the new designation is 41M. 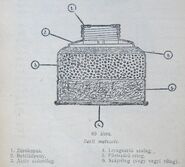 41M filter
Add a photo to this gallery

Generally called as "Hordszíj" (carrying strap) is a basic leather shoulder strap with additional smaller straps to fix the filter, so it is not capable to hold the mask inside as it was menat to only carry the filter when the mask is in use.

The "34M hordtáska" is made of canvas with a leather bottom. The little pocket under the lid is for the spare antifog inserts. The early bags have rivets on the top corners of the pocket.

Early bag.
Add a photo to this gallery 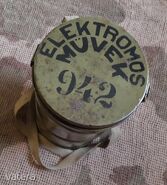 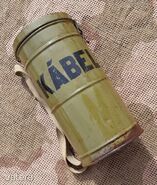 The canister can be seen on the hip of the right "Légó" worker. Budapest, 1938.
Add a photo to this gallery

Later the canvas bag was changed to the "42M Horddoboz" metal cylindrical box inlined with cardboard (very similar to the German ones). It has a metal frame on the inside lid which is for the anti-fog inserts but sometimes the Gázseb-csomag (Gas wound kit - decontamination kit) was stored there as well. The carrying strap is fixed to the canister on two points to the side. There is an other short strap connected to a hook wich was meant to fix the bottom of the canister to the belt. The military used ones were painted brown, after the war it changed to green. The civilian ones were enamel coated and lacked the normal carrying strap, instead it had a a handle on the lid to which a strap was connected. It is believed that the 42M is the copy of the Yugoslav M-33 canister. Because Hungary helped Germany in the invasion of Yugoslavia (1941), hence Délvidék (now part of Serbia) became Hungarian territory again. The war booty contained masks too which were given to Légoltalmi Liga. And the M-33 canister is very similar to the not much later 42M making the speculations quite valid. 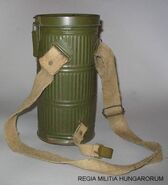 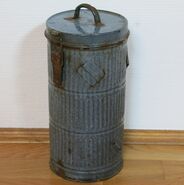 The bottom of the canisters.
Add a photo to this gallery

Telling the era of the mask is the easiest from the painting, but it is not a sure method because after the war the useable masks were re-issued with a new coat of paint. Using the stamps and other markings is not the best way either because like the painting after the war masks in good condition were reissued with new markings. So it can occur that a mask that was made before the war has communist markings and "Tildy" green eyepieces. Masks with a serial number on the forehead part under the sealing leather were made before or during the war.

The war production masks have dark olive-brown colored aluminium valve houses, the eyepiece assemblies and other metal parts are made of black painted copper, these metals are non-magnetic. The sealing leather is brown and the intake sealing ring is natural beige colored. The 42M carrying canisters are light brown coloured (soldier slang for the colour called it liba - "goose") and always has a metal hook to fix the canister to the belt.

The pre-war firefighter variant, called T. gázálarc or 33M tűzoltóálarc (not to confuse with the 33M), the mask had a flatter exhale valve cover and a bit different valve housing, otherwise, the mask was identical to the army variant except that the harness adjusters are not painted. It was used with German-made CO filters and Mercur T. gázálarc filter and hose. The filter was hang on leather straps.

This variant is identical to the civilian but was modified to use with rebreathers. The older type valve house was used, the exhale valve was removed and the hole was sealed. The inhale valve was removed then the valve fixing part was drilled through to mount the oral-nasal cup clamper ring with a screw. It didn't have an exact kit.

The industry used the 33M tűzoltóálarc with 33M légitsztító based industrial filters.

On the early ones every metal parts (valve housing, eyepiece assemblies, filter, carrying canister) are painted green (or the very early ones has the light brown color). And to reduce costs steel alloy (magnetic) was used instead of copper (non-magnetic) which is expensive.

Called Ipari gázálarc, it has mostly black rubber inside and sometimes come in the dark green colored canvas on the outside. Sometimes it lacks painted metal parts which are mostly aluminium and steel alloy. But the matte black or green painted metal parts are much more common. The periferial leather seal is not folded out but just sealed with rubber cement on the edge. Later it was succeeded by Ipari teljes álarc. 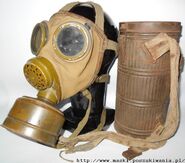 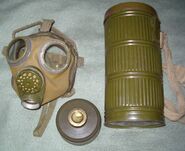 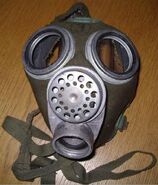 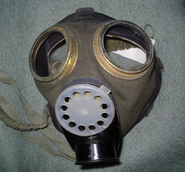 Can be confusing but this is not a 34M but an Ipari teljesálarc.

Later post-war production inside, black rubber-like on the 67M and 75M. (non-magnetic) 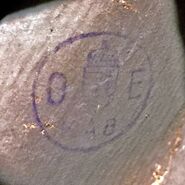 Rákosi communist coat of arms on a Post-War mask. 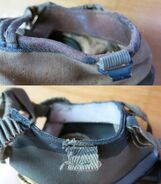 The difference between the normal 34M sealing leather and the Post-War industrial 34M (the same as on the Ipari teljes álarc).

The development started around the same time, in 1932, as the 33M and it came out just after it but in 1933 as well. The first model was the T. gázálarc which was called as 33M tűzoltóálarc before 1936, it was fine for the fire brigade but because it was intended to use with a hose the intake points downwards too much so with a smaller filter directly threaded on the mask it can be uncomfortable since the filter blocks the head tilting forward. The intake valve is also missing in the T. gázálarc because it was placed in the filter so using it with a smaller filter is again not the best. The placing of the exhale valve was too complicated too, this housing consists of 9 parts. To allow the use by the army which needed a new smaller and lightweight filter these issues required a new valve housing which came out in 1934. In the new housing the exhale valve still has a funnel where it can sit and it has an intake vale too, the exhale valve lid was also updated, this housing consisted of only 7 parts but was still a bit complicated to cast. The even newer housing came out in 1939-40, this one was optimised to war economy. Most notably the exhale vale funnel was removed. 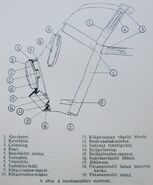 Cut drawing of the later but not War production mask. The exhale valve is lying on the metal house.

Later valve house, the exhale valve is lying on the metal house (funnel).

War production valve standing far from the housing because there is no funnel.

Inside look of the masks, T. gázálarc, 34M with updated housing and the War production housing.

Side view of the valve housing, T. gázálarc, 34M with updated housing and the War production housing.
Add a photo to this gallery

Before and during the war the facepiece, bag and filter were made by Mercur Műszaki és Vegyipari Rt. in Budapest, the average production was 100000 gas masks in a year and 500000 filters (41M) per month (this number includes Népgázálarc as well). The activated charcoal was provided by IPTER Műszéntermelő Vállalat, the rubber-coated canvas was made by Ruggyantaárugyár and the canvas for the bag was manufactured by Szegedi Len- és Kendergyár. Ony the antifog inserts were made abroad by Auer in Berlin. Just after the war, nothing changed but after the communist takeover Mercur was renamed to 1004. sz. Vállalat (1951-) and later to Műszaki Művek (1952-) and Medicor (1963-1990).

(1935-1945): The standard-issue gas mask for the army. The army was issued with 43M Gázvédő lepel (gas protective perianth) and the chemical troops used the mask with 37M Gázvédőruha (gas protection suit).

(1935-1945): The Civil Defence used the mask as M. gázálarc, it was issued to active members and clean up crews alongside with the Gumi munkagázálarc .

(1946-1951): The mask was again the standard-issue gas mask for the army alongside with the post-war models. The chemical troops used it with the same chemical suit as in the war. In 1949 there were 87639 pcs. in stock.

(1951-1953): After the short-lived democratic army and the communist takeover the army was renamed and a lot of things changed but the mask was in service until 1955 (til enough 51M masks were made).

(1933-1960s): Until 1945 the 33M tűzoltóálarc was used but after 1945 post-war models were used until the 1960s with industrial filters, fresh air breathing devices and supplied fresh air devices. The factory based emergency firefighter warehouses stored the model even before the regime change. 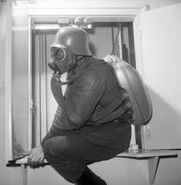 Firefighter in 34M mask with KG120 rebreather apparatus in 1958.

Red Cross worker, the filter is a 33M. 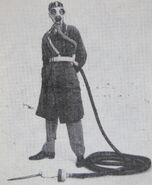 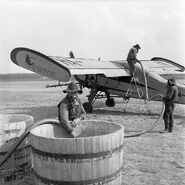 Agricultural spraying with a plane in the 1970s.
Add a photo to this gallery

Retrieved from "https://gasmaskandrespirator.fandom.com/wiki/34M?oldid=43664"
Community content is available under CC-BY-SA unless otherwise noted.