The Hungarian 51M but also know as 50M is a licensed variant of the ShM-1. The mask was issued to the Magyar Néphadsereg (Hungarian People’s Army), Munkásőrség (Worker’s Militia), Polgári védelem (Civil Defence) and to other organisations in the Belügyminisztérium (BM - ministry of the interior) like Határőrség (Border guards) and Rendőrség (Police).

The mask is a typical helmet styled rubber soviet mask. With two circular eyepieces that can fit anti-fog inserts but it also has a Tissot tube system. The valves are made of metal and have a 40 mm GOST thread. The valve house and the eyepiece assemblies are painted black unlike on the original ShM-1 or on other licensed variants.

The filter (similar to the EO-12) is a big flat canister filter connected by a hose to the mask.

The 51M bag is made of canvas. Inside there are 3 sections and 1 little pocket. The two same-sized parts are for the filter and the mask. There are 2 strips on the inner side of the filter part to fix the hose during use. The little pocket is for the antifog inserts. The big flat part is for the hose. For carrying it has an adjustable shoulder strap and an also adjustable waist strap connecting with a carabiner to a D-ring.

Belügyminisztérium (ministry of the interior)

The mask was used with 60M and 67M Összfegyvernemi védőkészlet (joint service general-purpose personal protective equipment) and with Nehéz and Könnyű gázvédő ruha (heavy and light gas protection suit) and Gázvédő kezes-lábas (gas protection coveralls) in the chemical troops. It was decommissioned from the army in 1966, however, Munkásőrség and the BM used it until the 1970s. The highest number in military service was 367000 in 1960.

The mask was used to heavy decontamination with the 60M Összfegyvernemi védőkészlet (joint service general-purpose personal protective equipment) because that was more suitable for civilian purposes than the 67M. The Nehéz and Könnyű gázvédő ruha (heavy and light gas protection suit) and Gázvédő kezes-lábas (gas protection coveralls) were also used with it.

The industry used the mask until the 1970s alongside with the Ipari gázálarc and Félálarc then it was mostly replaced with the 60M.

The Fire brigade used the mask until the 1970s.

The correct designation is 51M not 50M, all sources and references from that era call the mask 51M. The 50M name is a made-up name created because of the later 60M and 70M masks. It seemed logical that the mask designation is 50M and later this spread.

In 1966 and 1967 several boxes of masks were handed over to North Vietnam as a gift.

The CIA interrogated Hungarian dissidents after the 1956 uprising and collected information from other sources. A report from 1957 contains many true and false pieces of information. See the document here: [1]

Some of the mistakes of the report: 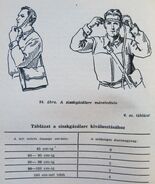 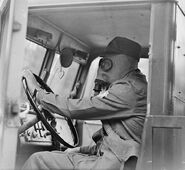 "Learn the basics of air defence!"
Add a photo to this gallery

Retrieved from "https://gasmaskandrespirator.fandom.com/wiki/51M?oldid=43894"
Community content is available under CC-BY-SA unless otherwise noted.