The Hungarian 60M is a licensed variant of the ShM-41m. The mask was issued to the Néphadsereg (Hungarian People’s Army), Munkásőrség (Worker’s Militia), Polgári védelem (Civil Defence) and to other organisations in the Belügyminisztérium (ministry of the interior) like Határőrség (Border guards) and Rendőrség (Police).

The mask is a typical Soviet helmet styled rubber (the rubber has a bit darker shade than on the ShM-41) mask. With two circular crimped-on eyepieces that can fit antifog inserts but it has also a Tissot tube system. The valve housing is made of metal which is painted dark green and has a 40mm GOST thread (the 67M has the same housing). It was made in 5 sizes.

This mask was made in the third quarter of the year.

54 is the serial number on the inside chin part.

Sallow manufacturing date "1968 JAN 2" and serial number above "08" most likely.

TAURIL MEO stamp (Taurus was sometimes called as Tauril before 1973). 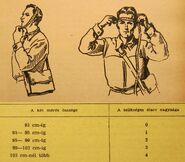 The 60M filter (licensed MO-4, similar to the EO-12) is a big flat canister filter connected by a hose to the mask. 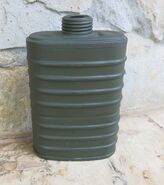 The 60M bag is made of canvas. Inside there are 3 sections and 1 little pocket. The two same-sized parts are for the filter and the mask. There are 2 strips on the inner side of the filter part to fix the hose during use. The little pocket is for the antifog inserts. The big flat part is for the hose. For carrying it has an adjustable shoulder strap and an also adjustable waist strap connecting with a carabiner to a D-ring. The 60M features 4 straps on the front for fixing the 60M Összfegyvernemi védőkészlet (joint service general-purpose personal protective equipment) leg parts.

The 68M bag is the mix of the 51M and the 70M bag. The inside is the same as on the 51M while there are 70M styled outside pockets and straps for carrying. The biggest on the front is for the personal decontamination kit (SzVCs) while the two smaller ones on the sides are for the antidote injections against nerve agents (KÉPA) and for iodine pills. There are 4 canvas straps on the front. Those are for to fix the 60M and 67M Összfegyvernemi védőkészlet (joint service general-purpose personal protective equipment) leg parts.

Carrying position.
Add a photo to this gallery

Belügyminisztérium (Ministry of the Interior)

The mask was used with 60M, 67M and 75M Összfegyvernemi védőkészlet (joint service general-purpose personal protective equipment) and with Könnyű gázvédő ruha (light gas protection suit) in the chemical troops and rocket fuel refillers. After the appearance of the 70M, the mask was first downgraded to M-zárolt (Mozgósítási zárolt - use only in case of war) and then decommissioned in 1979. 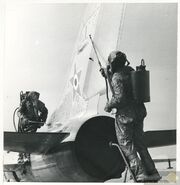 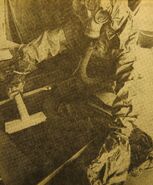 60M with 67M összfegyvernemi védőkészlet
Add a photo to this gallery

The mask was used to heavy decontamination with the 60M (and later probably with 75M) Összfegyvernemi védőkészlet (joint service general-purpose personal protective equipment) because those were more suitable for civilian purposes than the 67M. The Könnyű gázvédő ruha (light gas protection suit) was also used with it. It was in service until 1989.

PV decontamination exercise of a farmyard. (1973) 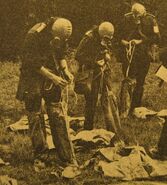 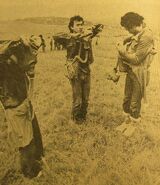 The industry started to use the mask instead of the 51M in jobs where better protection was necessary around 1970.

60M being used with an unknown industrial filter at Nitrokémia in 1973.
Add a photo to this gallery

The rubber facepieces were made by Taurus Gumiipari Vállalat while the assembling was made by Műszaki Művek and after 1963 by Medicor. Medicor also produced the antifog inserts. The bags were made by Salgótarjáni Ruhagyár. The highest number in service by the Magyar néphadsereg was 415000 in 1969.

Retrieved from "https://gasmaskandrespirator.fandom.com/wiki/60M?oldid=49214"
Community content is available under CC-BY-SA unless otherwise noted.