The Hungarian 70M is a licensed variant of the PMG. The mask was issued to the Néphadsereg (Hungarian People’s Army), Munkásőrség (Worker’s Militia), Polgári védelem (Civil Defence) and to other organisations in the Belügyminisztérium (ministry of the interior) like Határőrség (Border guards) and Rendőrség (Police), after the regime change also to the Magyar Honvédség (Hungarian Army).

The 70M facepiece is made of rubber, a different injection moulding technique and a cheaper worse quality rubber was used than on the original Soviet ShMG mask. It has two flat circular glass eyepieces (the glass is one layered while on the ShMG is double layered), which can fit anti-fog inserts. The eyepieces are just a bit angled to aid the use of optical equipment. For soldiers who had glasses, special lenses were available (but usually these were not issued), those could fit in the same place as the anti-fog inserts. There is a speech diaphragm located under a removable cover on the front of the mask, there are more and smaller holes on the cover than on the PMG. The doubled exhalation valve located towards the bottom of the mask, under the diaphragm. There are masks with black exhalation valve covers.  The strip which hides the wire that is fixing the speech diaphragm on the later ones (after ~1983) was changed to plastic from canvas. Around the same time the rim of the eyepieces were also changed to smoother angled one from the older scalar one. The mask takes a GOST-compliant filter to the side, in a thread unusually made from rubber, the air reaches the inside through moustache arranged Tissot tubes. There is a flat metal circle behind the inhale valve which helps to maintain the shape of the mask. Only right-handed masks were made. For the left-handed soldiers (even though only right-handed soldiers served in the army) left-handed PMGs were imported in small numbers but the diaphragm cover was changed. The 70M has a grey-colored strap at the back of the mask, its purpose being to allow a better seal, but the mask is secure on the head without its use being employed. The holes on the helmet part of the mask were made for ventilation of the head so the wearer wouldn't experience overheating. It also decreases the pressure on the head by the mask. The mask was made in 5 sizes. 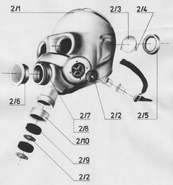 Cut of the mask.

A rare left handed 70M in a very bad condition.
Add a photo to this gallery

The 70M bag is a basic impregnated dark olive-colored canvas bag, in small numbers "Rába" camouflage pattern bags were also made. There are four separated parts inside. The biggest one is for the mask and weapon decontamination kit (FVCs-M). The smaller one is for the filter(s), there is a small canvas piece that is meant to be separate the spare filter if it was issued. The flat part is for the chemical gloves. The little pocket is for the anti-fog inserts and the spare membranes. There are 3 pockets on the outside. The big one on the front is for the personal decontamination kit (SzVCs) the side pockets are for the drug injections against nerve agents (KÉPA), iodine pills and water disinfectant tablets. There are 4 canvas straps on the front. Those are for to fix the 67M and 75M Összfegyvernemi védőkészlet (joint service general-purpose personal protective equipment) leg parts. For carrying it has an adjustable shoulder strap and an also adjustable waist strap connecting with a carabiner to a D-ring (the D-ring on the later models was replaced with a canvas loop).

Some officers got the soviet Type G bag wich was from the left-handed PMG intake, placing the previous accessories in it was a hard task.

Spare membrane and antifog inserts (both can be green painted or raw aluminium coloured).
Add a photo to this gallery

Belügyminisztérium (ministry of the interior)

The mask was used with 67M and 75M Összfegyvernemi védőkészlet (joint service general-purpose personal protective equipment) and with 65M Könnyű gázvédő ruha (light gas protection suit) in the chemical troops and rocket fuel refillers. Just before the regime change for testing purposes, 120 units of 89M Fólia védőlepel (foil protective cloak) was issued to the infantry. The highest number in service by the Magyar néphadsereg was 639000 in 1986 and altogether 1065000 masks were purchased.

The mask was used to heavy decontamination alongside with the 60M. The 70M was used with the 75M Összfegyvernemi védőkészlet (joint service general-purpose personal protective equipment) because it was more suitable for civilian purposes than the 67M. The 65M Könnyű gázvédő ruha (light gas protection suit) was also used with it.

The rubber facepieces were made by Taurus Gumiipari Vállalat while the assembling was made by Medicor, this is why there are different dates on the facepiece (by Taurus) and on the stamps (by Medicor). Medicor also produced the antifog inserts and membranes. The bags were made by Salgótarjáni Ruhagyár. The first masks were made in 1970 and the last ones in 1991, approximately 1100000 masks were produced.

Size 3 mask, the rubber facepiece is made in 1983 first quarter.

On older masks the MEO 348 (Minőség Ellenőrzési Osztály - Quality Control Category) is the older circular one.
Add a photo to this gallery

Interestingly but not that surprisingly the 70M bag has a greater impact on the popular culture than the mask itself. Because the 70M bag or as it is called in the slang szimatszatyor (flair bag) or szumka (from the Russian сумка - bag) was made of cheap and durable impregnated canvas combinated with a perfect size and outside pockets it is very suitable for everyday civilian use (for example as a school bag). Since the late 70s, the bag is widely used mostly by rock and punk groups alongside with (bachelor of arts) (university) students. Those groups sometimes also decorate their bags with the logo of their favourite band(s) or with other badges and patches. In the 80s one bag worth a bottle of Pálinka (famous Hungarian alcoholic drink) but because of the regime change and the modernisation of the army (the stockpiles were sold on auctions) the price is drastically dropped.

In 1978 the Hungarian government sent 6000 masks to Mozambique as a gift, it is possible that the shipment contained 70M masks too.

The Hungarian government have offered 3000 masks for the Gulf War to the coalition army but because of the slow administration, the war was over before the cargo was even shipped.

Painted membrane covers, the purpose and origin is unknown.

Retrieved from "https://gasmaskandrespirator.fandom.com/wiki/70M?oldid=43891"
Community content is available under CC-BY-SA unless otherwise noted.