The Hungarian 75M, mostly and wrongly known as 76M is a Civil Defense gas mask originally issued to civilians and to the Polgári védelem (Civil Defence) during the Cold War.

It is a full face mask made of a single sheet of rubber-coated dark green canvas formed by 3 seams, 2 on the forehead and one on the chin. It seals on the face via 4cm wide goat leather stitched to a rubber-coated canvas verge and folded out to the outside of the mask, but the stitching is sealed inside with rubber cement. The glasses are crimped to steel alloy assemblies which are pressed to the faceblank permanently, like on the 67M but without anti-fogging insert fixing rings (there are masks with 67M like lenses, those are believed to be retrofitted 67M masks because, save for the valve housing everything is the same as on a normal 67M). The 7 pointed, adjustable and elasticated harness is composed of three pieces and connected to the facepiece trough adjuster buckles, which are sewn to the facepiece. Elastication is done by rubber bands in each strap. The middle forehead straps is hooked over a metal roller frame and sewn to the outer forehead straps, so these can slide freely and automatically adjusts to the shape of the head. On the nape the temple straps and the strap of the roller frame are hooked up to a metal piece which is riveted to a leather pressure equalizer rectangle. The third part near the bottom would be wrapped behind the neck of the user and hooked to the left side of the mask to provide a tight seal and to prevent accidentally taking off the mask. There is a carrying strap on the bottom back of the mask and a chinstrap inside as well. The valves are placed in one black oval bakelite piece. Unlike other, earlier models of the rubber-coated canvas mask series in Hungary this one got a double, disc exhale valve instead of the old "tulip". Just like on the 67M, the 40mm GOST intake and the intake valve is placed above the exhale valves. Size 1 is the smallest and 4 is the biggest, size 0 was meant for children but was produced in very small numbers.

The dimensions of the string.
Add a photo to this gallery

Masks made in the 1970s have metallic copper colored metal parts (eyepiece assemblies and buckles) and the clamped metal ring that squeezes the canvas to the bakelite is covered with a grey tape like on the 67M.

Inside.
Add a photo to this gallery

The later models have bare steel alloy metal parts and are lack of the tape on the valve.

A later mask with gray inside rubber.

On later ones the exhale valves were rarely stamped with their own serial number.
Add a photo to this gallery

75M facepiece with a hood very similar to the ones on the Hungarian chemical suits, made of canvas covered with opanol. It was probably an experimental series in the 1980s to increase the protection level of the obsolete mask. And because the chemical suits doesn't seal well with the mask it was an attempt to produce a mask for heavy decontamination purposes which is surprising knowing that the 60M and 70M were already in service in that role by the Polgári Védelem (Civil Defence). Similar designs were already used by the industry, for example the Fejvédő kámzsa LIX porvédővel.

The size stamp is on the leather peripheral seal.

A loop can be found on the corner of both shoulder. 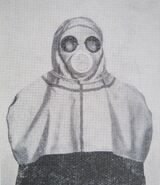 The 75M was issued with a filter extremely similar to the filter issued with the Soviet PMG series. It uses a GOST thread.

Simple canvas bag (PV-75M or just 75M) with 2 smaller parts in the lower section. The smaller is for the ERBVCs. The bag has 3 straps: one shoulder and two for fixing around the waist. It was made in several colors but the difference is minor.

30 kits were packed in one NK50 wooden chest, each chest contained 4 sizes distributed in the following proportions: 6 size 4, 9 size 3, 9 size 2 and 6 size 1. This packing method was more suitable for civil defence purposes than the one used on the mostly military issued 60M and 70M which were packed separately from filters and other parts of the kit.

NK50 wooden chest with label.
Add a photo to this gallery

The civilians would have been only given the kit but the registered and non-registered members of the Polgárivédelem were also issued with a Védőmunkaruha (protective work suit, made out of thick canvas, it gave minor protection against toxic agents) or a 75M összfegyvernemi védőkészlet (joint service general purpose personal protective equipment). Important factories also stored these masks alongside with other equipment (like ERBVCS) and certain workers were trained what to do in case of a war (non-registered members of the Civil Defence).

The mask was issued to the army as well, but it was more for like storing, the masks were never used by the army because the MN always had enough 60M and 70M masks.

There are only fewer documents and photos proving that the mask was used in the industry than about the 67M. Most of the photos are from exhibitions, there are no photos where the mask is being used. Some masks can be found in very bad used condition with Medicor industrial filters, but it have to be considered that after Chernobyl the Polgári Védelem (Civil Defence) was mainly focused on industrial disasters so a huge amount of filters were purchased and this can be the reason behind this anomaly. It can also occur that after the decommission of the masks in 1990 and then the appearance on the surplus market made it a good choice for individuals for private use.

In the early 1970s a cheaper solution was needed than the 67M to provide a mask for every citizen, partially because the production of the 60M ceased in 1970 so the use of the 60M valve housing on the 67M wasn't economical anymore. To reduce costs the anti-fogging lenses and its fixing rings were dropped and a new bakelite valve housing was designed.

The mask has a great impact on the popular culture, a mask can be found basically in every Hungarian household mostly because it was widely available after the regime change when the stockpiles were sold out (in the Cold War the masks were kept in Civil Defence warehouses and were not given to civilians). Because of this availability the mask (with the 70M filter) has still a great role in defending civilians against chemical agents, a lot of people still uses these masks on demonstrations against tear gas (notably on the 2006 autumn and 2018 winter demonstrations).

The bag itself is still very popular in certain music groups but not that much as the 70M “szimatszatyor” (flair bag).

The official designation is 75M not 76M. The incorrect designation is similar to the 51M case. Because the previous mask was the 67M people somehow confused the two.

Retrieved from "https://gasmaskandrespirator.fandom.com/wiki/75M?oldid=51082"
Community content is available under CC-BY-SA unless otherwise noted.