The Hungarian 93M gas mask is the licensed variant of the French ARF-A. It is currently the gas mask of the Magyar Honvédség (Hungarian Army).

The facepiece is made of black colored polyurethane which is very resistant against toxic agents. The eyepiece is panoramic and made of transparent polyurethane. Inside there is an oral-nasal cup and the straw of the drinking tube. The intake is on the bottom front under the voice diaphragm. The exhale is on the left side while on the right the intake of the drinking tube can be found. When inhaling the air enters the filter then the intake valve, from there it goes into two Tissot-tubes on the sides of the mask to defog the panoramic visor, just after these enters in the oral-nasal cup. The strap system which made of polyurethane and plastic connects to the mask on six points. The mask is made in 4 sizes.

Training (Kiképzési) model to show the soldiers the features of the mask. Only differs in a table on top of the eyepiece.

The filter is can be the 93M or rarely R05. The filter can be connected with a curved tube to make easier to aim with weapons.

The bag is made of plastic impregnated fabric, it can hold all the accessories of the mask. The user can wear it on the shoulder or on the belt.

The mask is used with the 93M chemical suit.

The main parts are produced in France by GIAT, the production of less complicated parts and the final assembly takes place in Hungary by Respirátor between 1993-2018 and later by Gamma.

Markings on the harness. The round one shows that the mask was made in 2003.

Size on the forehead. 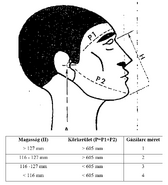 93M gas mask with 93M filter and 93M chemical suit.
Add a photo to this gallery

Retrieved from "https://gasmaskandrespirator.fandom.com/wiki/93M?oldid=43634"
Community content is available under CC-BY-SA unless otherwise noted.