The A1 was the standard military gas mask for the Argentinian army. It was manufactured by Pirelli Argentina on the base of the EM2.

The facepiece was made of a two-layers orange rubber, textured on the outside while smooth on the inside. The head harness had five straps. The eyepieces were made of three layers, two glass ones and a cellulose one. Inside the mask, there was a sponge layer that helped to prevent fogging while wearing the mask; this sponge-section design was attached directly to the rubber inside. The intake-outtake assembly is connected to the mask at the bottom and it has three holes: a threaded one for the hose, one for the connection to the mask and the third was for the exhale valve, kept still by a lid; inside there is an inhale valve. The filter itself was attached through a pleated hose threaded on both ends to the intake-outtake assembly, and itself was stored in its bag. 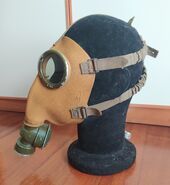 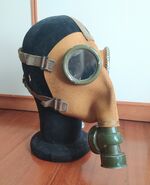 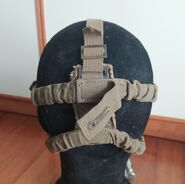 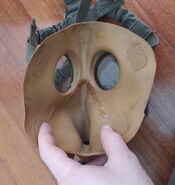 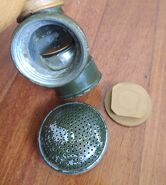 Exhale valve and its cover from the inside 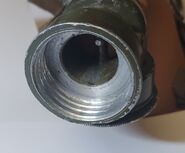 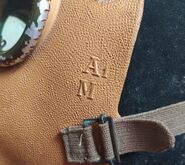 Left side marking. This sample is a size "M", which stands for medium in Spanish 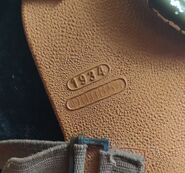 Right side marking. This sample is marked 1934 with serial number 857
Add a photo to this gallery

The filter was an adaptation of the Tubin pattern industrial filter that had a thread on the top. It has two holes at the bottom to let air in. 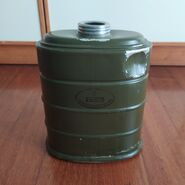 The filter. Note the thread and the "Pirelli Argentina" logo

Bottom of the filter. If you were to use the filter, you'd have to open both

Markings. The serial number 857 is almost completely faded but 1934 is clearly visible
Add a photo to this gallery

The mask came with its hose and filter inside a square bag, which had a section for the filter and another for the mask when not in use. Two small pockets on the inside stored a spare exhale valve in a box and the anti-fogging lenses.

Inlet thread on the hose 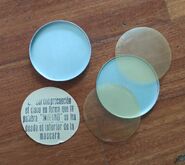 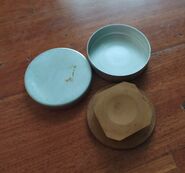 Spare exhale valve and its box. The first has the Pirelli star symbol 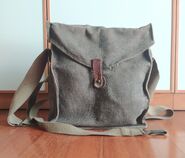 Bottom of the bag 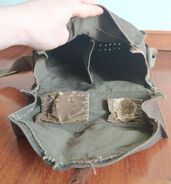 Inside of the bag. Note the two pouches on the inside
Add a photo to this gallery

The A1 was adopted in 1934 as the first Pirelli military mask for Argentina. It had some differences to its industrial origin, the EM2: the thread pointed backwards instead of at the front, the eyepieces were enlarged and the intake, the filter and the hose were given threads. The first of the three was made probably to reduce the bulk of the respirator, to avoid having the exhale valve bumping on things. The eyepieces were enlarged to give better visibility. The intake was provided with a thread probably as an emergency measure, as the filter can be used even if the hose is broken.

Possible issues for abandoning of the A1 Edit

The A1 had a very short lifespan in comparison to other military masks, as in only 2 years it was replaced by the A2; in fact, there are not many pictures of these in use. This might have been due to a number of possible reasons:

Retrieved from "https://gasmaskandrespirator.fandom.com/wiki/A1?oldid=39150"
Community content is available under CC-BY-SA unless otherwise noted.