The Austrian made ABC-92 is a one pieced protective suit with an integrated gas mask and breathing aid equipment. The suit is currently used by the Magyar Honvédség (Hungarian army) as the 96M, Slovenska vojska (Slovenian army) and Oružane snage Republike Hrvatske (OSRH; Croatian army).

The facepiece is glued together with the suit. It is a Dräger Karetta-M (based on the M65). The mask features two triangular eyepieces which are made of acrylic glass; these lenses provide a great field of vision which is aided by the fact that the lenses almost never fog up. The mask uses an all rubber 5-point head harness that fits the wearer very comfortably, however, the head harness can be hard to adjust at times. This mask's intake valve assembly uses NATO 40mm filter and is compatible with all NATO compliant-filters. Upon inhaling, air passes under the chin through two inlet valves so that the lenses don't get fogged up. The exhale valve with holes which air passes through them upon exhalation. The inhale and exhale valve assemblies are constructed of an O.D. plastic that doesn’t match the color of the mask's facepiece, and the oral-nasal cup of the mask is made of the same rubber as the facepiece. The mask also has a 3mm wide rubber peripheral seal which surrounds the entirety of the facepiece to form a better seal around the wearer's face. This flap also adds comfort to the mask when it is worn. Both intake and outlet assemblies are held in place with two O.D. which can be seen around the inhale and exhale ports. It also features a drinking system.

The suit is one pieced and made of on both side rubberised fabric (520g/m2), it can be closed by a long sealing zipper from the right knee to the left shoulder. The wellingtons are chemical-proof and glued to the suit. The chemical gloves are five-fingered and can be connected to the hardened plastic ring on the wrists. Wool gloves are worn under the chemical gloves to increase the comfort wearing the chemical gloves. There are 3 sizes, S-M-L, from 175cm to 190cm height.

The SAB-87 breathing aid system helps the user and also blow air in the suit to increase the comfort of the suit when wearing it long periods. (280l/min, it uses 5 pieces of  1,5 V dry batteries). The three filters are can be either 93M filters or rarely R05 filters in Hungary, Croatia and Slovenia use M95 filters.

Despite its origin (this is an Austrian chemical suit), it was never used by the Bundesheer (Austrian army). The Slovenian army uses it with the M95 mask and usually without the SAB-87. In Hungary, the 96M suits could be repaired by Respirátor Zrt. but nowadays it is done by Gamma Műszaki Zrt.

Drawing of the suit. 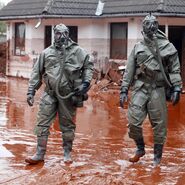 Croatian soldier in a full kit.
Add a photo to this gallery

Retrieved from "https://gasmaskandrespirator.fandom.com/wiki/ABC-92?oldid=43635"
Community content is available under CC-BY-SA unless otherwise noted.