The AG 15/AG 20 series of respirators were Belgian civilian masks made by L'Anti-Gaz. The facepiece was based on the M1934, but it had a double hook system and a threaded inlet-outlet. This series had the government-approved authorisation N.121 in Belgium and N.1911 in France.

Some AG 20 masks were exported and used in a military context.

The faceblank was flat moulded into a shape identical to that of the M1934, with smooth rubber on the inside and textured rubber on the outside.

The eyepieces were 66mm wide and made of triplex glass. They were affixed to the mask with each lens having a top and a bottom aluminium frame. Anti-fogging lenses were positioned in two possible ways, depending on the variant.

The 6-straps system was attached to the mask in 4 points and a hook on each side of the facepiece that would hook onto the lower two straps. The straps could be either like the M1934 material-wise or just be made of rubber.

The sponge septum on this mask serves the purpose of making contact with the face over the nose and therefore reducing the "dead-space" in the mask, which means reducing the space in which air flows, and in which CO2 can accumulate and tire the user out. This sponge septum is directly glued to the inside of the faceblank. 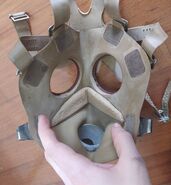 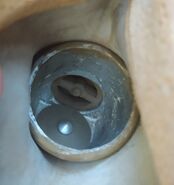 Inlet-outlet piece from the inside 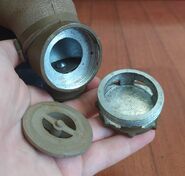 Disassembled
Add a photo to this gallery

The cover of the exhale valve could be of two different types:

There were 3 different types of harness:

Most facepieces had a 25 mm thread and an inlet valve, with the exception of the French export variant, which sported a 42 mm thread. 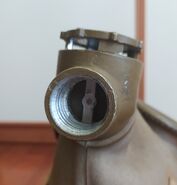 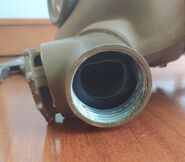 42mm thread. Note the lack of an inlet valve 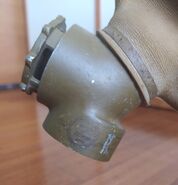 42mm thread, from the side
Add a photo to this gallery

The anti-fogging lenses could be applied in two ways:

The AG 15 family comprised of those masks that were used with the filter directly attached to the facepiece.

The AG 15 could be issued with two tube carriers, either one identical to the AG 5 one on earlier kits, or else, on later models, another one similar to the L.702 one, but with a "L'Anti-Gaz" marking and a different colour.

Inside of the early carrier. Note the metal piece for holding the spare exhale valve

Top of the early carrier 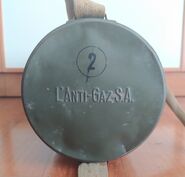 The AG 15 could be issued with four different filters, depending on the variant:

A bilingual manual, it varied depending on the variant is was issued with. Pictures may be found in the gallery at the bottom of the page.

Early AG 15 kits were sold with a spare exhale valve inside a small round box.

Some AG 15s were issued with a special thread that allowed for 42 mm filters to be used.
I
Add a photo to this gallery

The AG 20 family comprised of those masks that were used with a large filter connected to the facepiece through a hose.

The AG 20 came with a bag marked "Sacic S.A.". The bag was sectioned in two parts, one for the storage of the mask and hose and the other for the filter, as it had a hole in the bottom so that air could pass through.

Inside. Note the pocket for the spare anti-fogging lenses

A typical AG. 20C. kit (first pattern), complete with everything
Add a photo to this gallery

The filter used was a large Sacic filter, the same used with the E2. 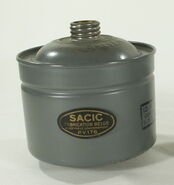 Large SACIC canister
Add a photo to this gallery

The hose used had a thread on both ends, it was made most of the times by Sacic and occasionally by L'Anti-Gaz.

An AG 20 hose, in bad condition

Sacic marking on the hose

L'Anti-Gaz marking
Add a photo to this gallery

A bilingual manual, it varied depending on the variant is was issued with. Pictures may be found in the gallery at the bottom of the page.

Sometimes spare anti-fogging lenses could be found in a pocket of the bag.

Note that the part of the designation in brackets is not official, and it's only there to distinguish the variants. 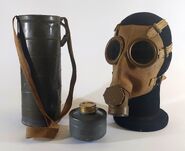 During the late '30s and early '40s, the KMT army sought to improve its chemical defence, due to the heavy use of gas by the Japanese, and therefore an increased local production was supplemented by considerable import. Because Germany was not available due to wartime shortages, another alternative importer had to be found, and Belgium was chosen. Alongside many L.702 masks, some AG. 20Cs were imported too. It's unclear to what scale the latter was used, and whether the facepiece was one made by L'Anti-Gaz or by Sacic. 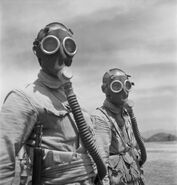 Two abandoned gas masks in the Hubei province, 1942. The filter is the same used with some variants of the AGM
Add a photo to this gallery

Retrieved from "https://gasmaskandrespirator.fandom.com/wiki/AG_15/AG_20?oldid=41791"
Community content is available under CC-BY-SA unless otherwise noted.