The AG 5 and AG 10 were Belgian civilian masks made by L'Anti-Gaz. The design was based on the Italian P43.

The faceblank was flat-moulded with a rough texture on the outside and a smooth one on the inside.

The faceblank has two cavities to fit the triplex glass lenses, and two aluminium frames were crimped onto this assembly to keep the lenses in position. The size of the lenses can be either 50mm or 66mm.

The inlet piece is positioned at the chin, it has a 25mm thread and an inlet valve.

The 5-straps head-harness has 4 elastic straps on the side, adjustable through buckles, which all gather into a nape pad. The top strap is attached directly to the facepiece, and it can be adjusted through a buckle on the nape pad.

The mask is marked on the side with a size stamp, the name of the company and the government agreement number. 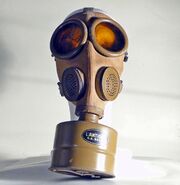 AG 5 facepiece with the larger, 66mm eyepieces
Add a photo to this gallery

The mask came in a cylindrical box with the filter, the anti-fogging soap, the instructional pamphlet, a manual and a box containing a spare exhale valve.

There were two patterns of filter, overall they didn't differ much, save for a slight reduction in bulk and weight in the second type. Carriers also had two variants, with the earlier type having more ridges than the later pattern. 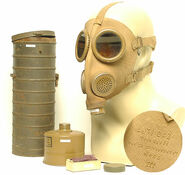 Late AG 5 kit
Add a photo to this gallery

The AG. 10 is the active version of the AG. 5. It was issued with a hose, a large filter and a cage carrier, but currently, there are no pictures available.

F
Add a photo to this gallery

Retrieved from "https://gasmaskandrespirator.fandom.com/wiki/AG_5/AG_10?oldid=42175"
Community content is available under CC-BY-SA unless otherwise noted.