The facepiece is made of black colored polyurethane which is very resistant against toxic agents. The eyepiece is panoramic and made of transparent polyurethane. Inside there is an oral-nasal cup and the straw of the drinking tube. The intake is on the bottom front under the voice diaphragm. The exhale is on the left side while on the right the intake of the drinking tube can be found. When inhaling the air enters the filter then the intake valve, from there it goes into two Tissot-tubes on the sides of the mask to defog the panoramic visor, just after these enters in the oral-nasal cup. The strap system which made of polyurethane and plastic connects to the mask on six points. The mask is made in 4 sizes.

After the regime change in Poland there was a need of a new gas mask to replace the MP-4. The licensed Polish ARFA is called MP-5 and was manufactured by Maskpol. Ukraine uses Polish-made MP-5U masks.

After the regime change in Hungary there was a need for a new gas mask to replace the very outdated 70M. Respirátor was bought by Comasec in 1990, a French company so the licensed Manufacturing has begun. Comasec Respirátor was nationalized in 1995 so it was Respirátor again. Then in 2008 it merged together with Gamma.

A number of ARF-A masks were purchased by the Italian Red Cross and are being used alongside numerous surplus respirators coming from the Italian army's depots and numerous commercial respirators such as the Sékur SFERA. The Italian ARF-A masks were purchased through "NBC SYSTEM", a company providing CBRN protection devices, new ones and retailed ones. The mask can be seen issued with various filters: regular CFF3, CFF4, M.58, M.91, and various industrial ones. 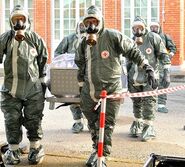 A page of the instruction manual, in Italian
Add a photo to this gallery

It is the main issue mask in the Forças Armadas (Portuguese Armed Forces) however the designation is unknown.

Portuguese troops on training, the chemical suits are French.
Add a photo to this gallery 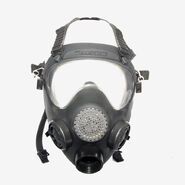 ARF-C, civilian variant of the ARF-A with an extra exhale valve instead of the drinking attachment
Add a photo to this gallery

The bag, mask, and CFF3 filter.

Inside of the bag.

Part of the lettering on the side of the bag.

Side and rear of the bag. The bag has two hooks on the back.

Front of the carrier bag.

Back strap markings that state that the mask was made in 1996.

Chin markings under the filter inlet.

Somewhat a photo of the inside of the mask.

Size marking on top of the mask.

Serial number stamped on the front.

The ANP VP F1 mask from the front.

The 40mm CFF3 filter still in its seal.
Add a photo to this gallery

Retrieved from "https://gasmaskandrespirator.fandom.com/wiki/ARF-A?oldid=43388"
Community content is available under CC-BY-SA unless otherwise noted.