In 1916, the French military began experimenting with copying and upgrading the GM15. Originally the prototype that would become the ARS, known as the MCG, had a faceblank made from a layer of rubberized cloth and no Tissot deflectors. Because of fogging and the inability of the mask to resist tear gas, the MCG was updated to include Tissot deflectors and a backing of cloth boiled in linseed oil. Also added to the MCG was the same head harness as that on the M2.

In January 1917, the upgraded MCG was adopted as the ARS and would continue to see service in the French army until after the First World War with over 5,270,000 examples being produced.

The faceblank is made from a layer of rubberized cloth backed with a sheet of cloth boiled in linseed oil. To support the lenses, a rubber rectangle is sewn into the faceblank. The lenses themselves could be made of either celluloid or glass. The artillery model of the A.R.S. had reinforced lenses. Within the facepiece is a set of Tissot deflectors made from rubberized cloth. All seams on the facepiece are reinforced and made airtight with rubber cement and the peripheral seal is made from a roll of the facepiece's fabric sewn in place.

The head harness is a seven-point design. Those of wartime examples are identical to that of the M2 and made from cotton elastic while postwar examples the sport coil spring head harness used on the A.N.P. T-31 and TC-38. The nape strap is disconnected from the rest of the head harness as it is on the M2, A.N.P. T-31, and TC-38.

The canister, as stated earlier, has a 42mm threading. Within, there are three layers of absorbent. The first layer consists of charcoal and soda ash, the second layer is made entirely of charcoal, and the third layer is a series of impregnated gauze pads. Throughout the rest of the war, there would be many chemical updates to the absorbents in order to increase efficacy.

The ARS was carried in a metal can, similar to those used by the Germans. These carrying cans would protect the mask from shocks and water to a great degree. Instructions for using the mask can be found on the inside of the can's lid.

Use in Poland[edit | edit source]

ARS gas masks are included in the so-called General Haller's Blue Army, which was equipped with French equipment. The Blue Army was transported in 1919 with all equipment to the territory of the newly created Poland. ARS gas masks have been replaced over time by licensed in France R.S.C. gas masks produced in Poland. 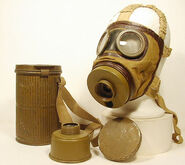 An ARS as worn.

Side view of a wartime ARS.

Frontal view of a wartime ARS.

Frontal view of a wartime ARS without canister.

Side view of a wartime ARS without canister.

Inlet/outlet assembly of a wartime ARS.

Markings on the retaining cord of a wartime ARS.

Bottom view of a wartime ARS.

Head harness of a wartime ARS.

Interior view of a wartime ARS.

The 42mm port of an ARS' canister.

The side of an ARS' canister.

The bottom of an ARS' canister. 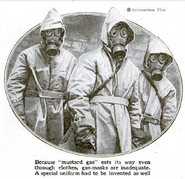 French chemical suits from the First World War paired with the ARS. Photo taken sometime in 1917.
Add a photo to this gallery

Retrieved from "https://gasmaskandrespirator.fandom.com/wiki/ARS?oldid=50367"
Community content is available under CC-BY-SA unless otherwise noted.