The Ajax F1 was a French licensed copy of the Italian P43.

The Ajax F1 was composed of a flat-moulded faceblank made of beige rubber, smooth on the inside and textured on the outside. To said faceblank, the following were attached:

The filter used with this mask was an adaptation of the Dirin design, modified to have a 42mm thread. Later kits were issued with various other French civilian filters. 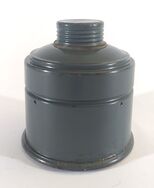 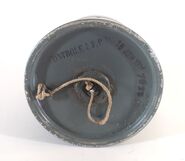 The kit this mask comes with varies, with most mask coming with a random French civilian filter and carrier.

The original kit consisted of the following:

A microphone could be provided if requested.

On the lower right, an Ajax F1 can be seen being used with a microphone

Various French masks, including 2 Ajax F1s (from the left the second and the fifth)
Add a photo to this gallery
Retrieved from "https://gasmaskandrespirator.fandom.com/wiki/Ajax_F1?oldid=42067"
Community content is available under CC-BY-SA unless otherwise noted.