Edit
watch 02:56
Doctor Strange in The Multiverse o Madness - The Loop
Do you like this video?
Play Sound

This article has many questionable information and is under research by many people. The current state is only good for starter collectors to understand the basics about this piece.

The C3 NBCW Protective Mask is a full-face respirator developed by the General Tire and Rubber company of Canada (GTR), with the earliest examples dating back to the 1960s, though evidence suggests they may have been around in the 1950s as well. Before this mask was known as the C3, it was called the No. 2 Mk. 2/1 NBCW Protective Mask and was issued alongside upgraded Mk. I and II Canadian Light Respirators.

The C3 has evolved over its life but most of the core components remained consisted, seemingly meaning that the mask would never change its name after it was renamed C3. There are four primary versions of the C3 which have been found thusfar. Originally, the C3 used the same rubber mask, valve holder and cover as seen on all other models, however, the original model of C3 featured a British-spec headharness known as the No. 4 Mk. 4 harness, did not feature a vomit guard inside of the mask, and was fitted with the US M11 Canister.

The most common type of C3 is the second type. This type features the aforementioned core components but now is usually found issued with aluminium eyepieces, a new headharness, and a new canister known as the C1 canister. This is the most common C3 seen on the surplus market and former-Danish models are often found on eBay and other sites.

After this model, the traditional method of securing the container mount and valve holder, two wires tightened, snipped, flattened and covered by fabric tape, was replaced with the use of a special set of securing clips. It is said that these clips were prone to bursting open, so were apparently replaced eventually.

An additional model of C3 exists which features a special container mount with both a 60mm and 40mm thread. It is assumed that these were used for export, some sources confirming that they were used by the Dutch.

Another rubber mask exists with an unknown name. This alternate rubber mask does not feature a central triangle mount but instead has the flat nose as typical of the British L2 and L3 rubber masks. These are mostly seen used later into the life of the C3 but can be seen earlier as well.

Dutch Armed forces demanded new type of mask due to their inventory of obsolete masks such as K-52. Baron and General Tire Rubber Company exported this masks for further military use and civil defence for Netherlands.

Version 1 is the standard Canadian C3 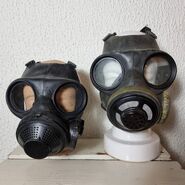 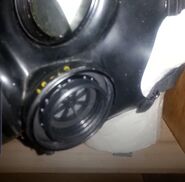