Fire and Rescue Department of Malaysia

The Canadian C4 is the current issue respirator of the Canadian armed forces, but is being slowly replaced by the C5. The Defense Research Establishment of Ottawa (DREO), production started in the early 1980s and the mask serves as an excellent example of the "Fourth Generation Respirator".

The mask was originally black, but adhesive issues were subsequently discovered, and to clearly differentiate current issue masks from the faulty version, the amended masks are green or tan.

The Canadian C4 has convex dual polycarbonate eyepieces that provide a reasonable field of vision, in contrast to masks with circular flat lenses.

The mask itself is made of butyl rubber. A voice diaphragm is located beneath the eyepieces, and more modern versions include drinking straws. The filter canisters can be attached on the right or left side, allowing both left and right handed users to sight weapons. Astride of the voice diaphragm is either an exhale valve or an inlet valve, depending on the model. The mask has a six-point fabric head harness, with only two adjustable straps, the adjustable being the bottom ones below the user's ears.

The C4 surpasses NATO and related Triptych requirements for face, eyes and respiratory tract protection against chemical and biological warfare agents when used with an approved filter/canister.

The C4 compared to its predecessor, the C3.

Designation molded on right cheek of mask. Note the insignia below.

The other side of the pull tab on the skullcap head harness. Shows its respective size(s)

The mask's nose cup. Note how this is semi-transparent, rather than it being the matching colour of the facepiece.

The C4 gas mask could connect to the canteen.

The C4 gas mask kit comes with a bag, nerve agent testing booklet, nerve agent vapour tester, spectacles holder in green case and filter are common. Note that this kit has a green C2A1 filter canister instead of the more appropriate C7 or C7a filter canister.

The interior of the C4 gas mask has a silicone orinasal cup. The Bromobutyl construction of the mask is very durable and remains soft and supple even after several decades of proper storage.

The AC4 was made for use in the aviation. The facepiece differs from the regular type by having a microphone port on the left, the drinking tube on the right side instead of the left and a plug on the voice diaphragm. The mask comes with a hose connecting to a PAPR with a double filter inlet. 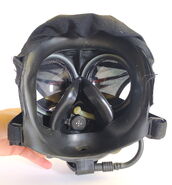 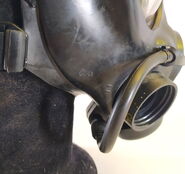 The XC4 was developed by DREO in 1988. These prototypes utilized thermoplastic hardware some variants of the mask featured a nose occluder. The nose occluder is a pair of prong members made of a rigid material. Each prong member is adjustably attached at one end thereof to a lower rim portion of a respective eyepiece at an angle with respect thereto so that it is directed inwardly toward the nose of the wearer.

Size stamp on the XC-4 Gasmask

Defence Research ESTABLISHMENT SUFFIELD RALSTON (ALBERTA), Assessment of Commercial Alternatives to the C4 Mask For Use in Moderate to High Risk Biological Scenarios