Despite the adoption of the Richardson-Flory-Kops in February 1918, the C.E. was used by the A.E.F. until the end of the war. After the armistice, many C.E.s were repurposed for training, put on the surplus market, kept in storage, or modified for industrial use.

The facepiece of the Corrected English is made from cloth backed by rubber. Located on the sides of the facepiece are two defogging pockets that can be inverted in order to manually clear lens fogging. The angletube is mounted to the front of the facepiece and leads into a rubber mouthpiece through which air would be inhaled and exhaled. The interior of the mask also contains a noseclip. Connected to the angletube is an MI 'flutter' valve made from gum rubber and a 254 mm (10-inch) hose leading to the canister. The C.E. came in five sizes: 1, 2, 3, 4, and 5 alongside wide variants. Sizing is marked on both the carrier's flap and on the circle created by the noseclips' spring on the outside of the mask.

The mask's lenses can be made from either triplex glass (two layers of glass with a layer of celluloid plastic between them) or just plastic.

The mask invariably has a five-point head harness. The change from a five to six point one is the primary difference between a C.E. and R.F.K.. The earlier C.E.s have head harnesses that are only adjustable by using a safety pin issued with the kit while later examples feature harnesses with adjustable buckles.

Another mid-life change that the C.E. underwent is an upgrade to the exhale valve guard. The early type of guard was bulky and wrapped around the entire angletube and used a single screw to fasten it to the mask. The later type is much lighter and uses two screws to lock into threaded ports molded into the angletube.

The hose is made from stockinette-coated rubber and is attached to both the angletube and canister via fabric tape and wire. The 254 mm (10-inch) length is satisfactory for using the mask when the carrier is properly worn on the chest.

The C.E. used a multitude of different canisters including the Type G (adopted January 1, 1918), the Type H (adopted April 1, 1918), and the Type J (adopted July 1, 1918). It is currently not known what canisters the C.E. was using between October and December 1917 but it is most likely the Type F but the Types D and E are also possibilities.

The C.E.'s inlet valve is built into the canister and is located on its bottom.

This canister is much smaller than the earlier types A through D, a feature carried over from the Type F. It differs from the Type F, though, in that it contains an increased amount of war-gas absorbent (a 60/40 ratio of A-4 charcoal and Astoria purple soda lime). The absorbent is divided into three sections with cotton pads between each layer to act as a smoke filter.

The Type H is a yellow canister that can be told apart from the Type G using the same methods described in its section but the Type H will have an "H" following its serial number.

Internally and dimensionally, the Type H is identical to the Type G. The sole difference between the two being the replacement of Astoria purple soda lime with the much more effective A-25B pink soda lime. This canister had the highest level of protection of the war, second only to the MI Felt Filter.

The Type J was adopted in order to reduce the amount of breathing resistance present in the earlier canisters. This was done by lowering the amount of absorbent and creating a large air pocket within. Because of the A-25B soda lime, the Type J was a viable option as it was able to keep a satisfactory level of protection while also completing its goal of low breathing resistance. Packing issues present in the canister, however, would quickly lead to the development of the Type L.

This canister, unlike the types G and H, is painted green and is therefore easy to distinguish.

The MI Chest Carrier is an improvement to the British style of chest carrier in that it is much more compact and features some more durable parts. They are made from a waterproof canvas.

Proper use of the carrier is done in three steps. Firstly, when marching in an area of low likelihood of a gas attack, the unit is carried on the left side of the body with the flap facing the body. When the mask is suspected to be needed soon, the carrier is pulled to the chest, the clip engaged, and the retaining cord tied around the body. The lift-the-dots on the flap are opened while keeping the flap itself closed. This is known as the alert position. If a gas attack occurs, the mask is brought out from the carrier and donned.

When actually in the trenches, the most common way of wearing the MI Chest Carrier is to have the shoulder strap around the neck with the clip engaged while having the retaining cord tied around the body. To take pressure off of the neck, the shoulder strap - with the clip disengaged - can be brought down to the mid-back and the retaining cord looped through.

The C.E. would be issued with a small tin containing a cloth and a stick of anti-dimming compound. This was meant to prevent fogging in the facepiece.

Attached to the hose by a cord is the issue card. It contains places to write information on the mask's field use as well as a safety pin for adjusting the head harness and a few pieces of repair tape.

Issuing card. The same type of card was issued with R.F.K.s. Note the presence of the safety pin for adjusting the head harness and the repair tape.

Eye lenses. Note how the celluloid layer in the lens has deteriorated greatly. 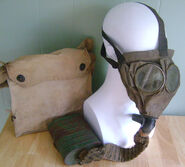 The Corrected English donned. From the collection of Charles "Botstowo" Byrne.

The Corrected English in its MI Chest Carrier. From the collection of Charles "Botstowo" Byrne

A Russian soldier using a C.E..

US Chemical and Biological Defense Respirators: An Illustrated History by Christopher T. Carey.