Technically the Dräger-Tübben is a rebreather and not a mask but it was used as protective equipment against chemical agents during the First World War.

The breathing bag is connected to a metal valve system to which the regenerating cartridge and oxygen tank connects on the bottom. The regenerating cartridge directly connected to the breathing hose which led to the mouthpiece to which a nose clip was fixed with a string to prevent inhaling toxic gasses through the nose. The equipment could be hanged from the neck by leather straps on the chest.

It weighs 4,5kg and can provide oxygen for 45 minutes in a calm state while only for 20 minutes during hard physical work.

It was designed in 1913 by Dräger and was issued just before the war broke out. Originally the device was mostly used by sapper and pioneer branches to protect themselves during fortress sieges or undermining where CO (and CO2) threat is very high.

A different variant of the Dräger-Tübben with a smaller cartridge and oxygen tank was used by some countries listed below: 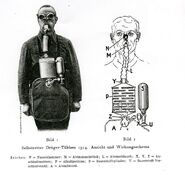 In use by German troops.

Dräger-Tübben (special variant) used by Italy in WWI. On the top 2 photos, a captured K.u.K. GM15 can be seen.

Belgian soldiers with Dräger-Tübben (special variant). Note that the glasses are not the ones usually issued 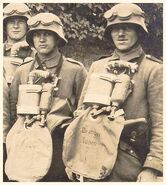 Detail of the other picture

Retrieved from "https://gasmaskandrespirator.fandom.com/wiki/Dr%C3%A4ger-T%C3%BCbben?oldid=41151"
Community content is available under CC-BY-SA unless otherwise noted.