The Estonian E-III (sometimes it is wrongly called ARS-40 or E.III) was the close copy of the Finnish M/30.

The facepiece itself is made of moulded orange rubber which is covered by drab colored stockinet material. The glasses are in metal assemblies. The 42mm thread is on the chin fixed to the mask with rubber cement and wire. The Tissot-tubes which can be seen in the M/30 were left out. And unlike the M/30 the exhale valve is not inside the mask but on the front in metal housing. The 5-point harness connects to the mask via metal buckles where the harness can be adjusted. The mask sports a production number, the masks with a bigger number than 20000 are most like from the Soviet era. Civilian masks can be identified by that the civilian ones have a much lower number than the military ones for any given year because the numbering restarted in 1937.

The filter connection is rather strange. As the filter is fixed to the hose but the other end of the hose sports a thread where it can connect to the mask.

The civilian kit came with a Dräger 455 lightweight filter but after the Soviet occupation, the civilan masks came with a nationally-produced Delat E-IV filter.

The bag is very similar to the M/30 and Mk. I SBR bag. There are two sections inside the one with a spring on the bottom is for the filter while the other is for the mask. The only outer pocket is for the accessories.

The production started around 1934 and the average production was about 4000 per year until 1941 when the production ceased. It remained in service even after the Soviet occupation but mostly with Soviet-made filters like the MO-2. 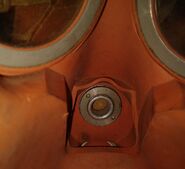 Inside of the mask.

Radio operator variant.
Add a photo to this gallery

Retrieved from "https://gasmaskandrespirator.fandom.com/wiki/E-III?oldid=43697"
Community content is available under CC-BY-SA unless otherwise noted.