The EM2 was an Italian gas mask made by Pirelli for industry use.

The EM2 mask's facepiece was made of a two layers beige rubber, textured on the outside and smooth on the inside. The head harness had five straps, 4 of which were elastic. The lenses were made of triplex glass. Inside the mask, there was a sponge layer that helped to reduce the dead space inside the mask and to prevent fogging while wearing it; this sponge-section design varied slightly from the Penna respirator to closen the eyepieces to the eyes so to give a better field of view. The inlet-outlet assembly is connected to the mask at the bottom and it has three holes: one for the hose, one for the connection to the mask and the third was for the exhale valve, kept still by a lid; inside there is an inlet valve. The filter itself was attached through a pleated hose to the aforementioned piece and itself was stored in its bag or cage carrier.

The mask and its hose 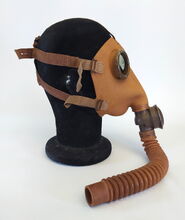 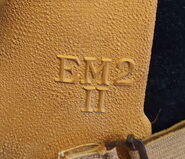 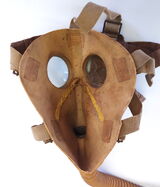 Inside. Note that most of the sponge is not there anymore 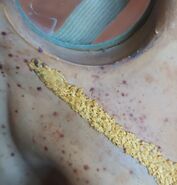 Marking inside the mask, partially hidden by the sponge 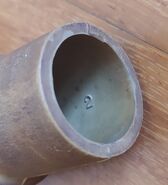 Marking inside the hose 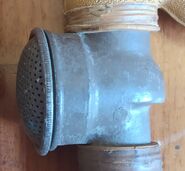 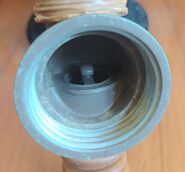 Close-up of the inlet-outlet piece without its valves 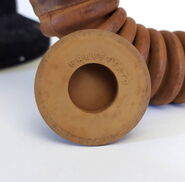 Marking on the exhale valve, meaning "patented" in Italian 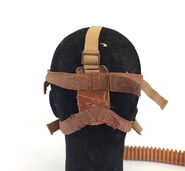 Harness
Add a photo to this gallery

The mask was issued with a filter that depended on the kind of protection required in the buyer's working condition. The most common filter was the "Tubin", a metal box similar to the one of the Penna.

The mask was used in two configurations. With the first one, the mask came with a satchel similar to the one of the Penna respirator: it had two sections, one for the mask and the other for the filter and hose. The filter section had holes to allow airflow. The main strap had a special buckle to be shortened when the mask was in use; the small string on the side of the satchel helped to keep the aforementioned firmly onto the wearer's chest. In the second configuration, the filter was put in a small cage satchel on the wearer's chest.

EM2 from a Pirelli catalogue

Same pictures, but from a different book. Note that even though these are listed as "military type" masks, they were never adopted

A portuguese firefighter with an EM2. The degree to which this mask was used is still unknown

Retrieved from "https://gasmaskandrespirator.fandom.com/wiki/EM2?oldid=42124"
Community content is available under CC-BY-SA unless otherwise noted.