The E0-16 filter canister is a Soviet-made 40mm (GOST threaded) filter designed for NBC use. Introduced in the early 1970s, it was issued with the ShM-41, ShMS, MM-1 and PRVU gas masks.

Often referred to as the "coffee can" filter due to its cylindrical form. 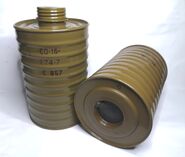 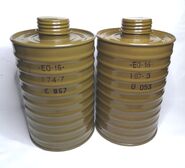 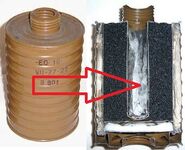