The Czech Fatra FM-1 was the main mask produced by Fatra before the Second World War for civilians. But after the war, it was used in the industry and by firefighters as well.

The facepiece is made of moulded gray rubber. The round eyepieces are held by black painted steel assemblies. The valve house differs by the model, it can be made of grey painted metal or bakelite and clamped to the faceblank with a single metal strip. There is a Tissot-tube system leading to the eyepieces to defog them, it is visible from the outside. The head harness also differs by the model but overall it can be said that it is a 6 point harness made of rubber bands and connects to one or two pressure reducer slab(s) on the back and can be adjusted on the buckles connecting to the faceblank. It has a carrying strap but its connection to the mask differs by the model. 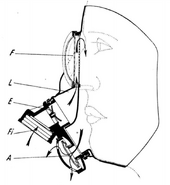 The valve house is made of gray painted metal. The intake is located on the top and is a bit angled downwards to reduce the down pulling effect by the filter. The exhale valve is under the intake, the unscrewable lid protects the tulip styled valve. The harness is connected to the faceblank via riveted metal buckles. 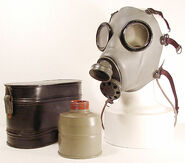 Compared to the FM-1a it got a new valve house made of black bakelite. And the faceblank is covered with stockinette to protect it from physical damage. The harness stayed the same but its connection to the faceblank was greatly upgraded. The buckles are moulded in the rubber.

The only upgrade compared to the FM-1b is the new valve house, it is also made of bakelite but the exhale valve is on the top while the intake is now on the bottom facing downwards more than on the previous models. This greatly reduced the pulling down effect of the filter. 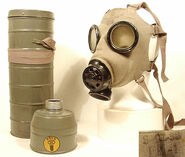 The FM-1d is somewhat a regression compared to the FM-1c. The stockinette was abandoned just like the moulded in buckles, the older FM-1a styled riveted ones were used. It got a new but worse bakelite valve house. The intake is not angled downward so the filter pulls the mask down too much. There is a "FATRA" sign on the unscrewable exhale lid, under it a metal mesh can be found wich functions as a voice amplifier.

The filters were produced by Fatra as well and were marked FF-x (x being a number between 1-5).

Carriers for the mask vary, probably depending on the price, from cardboard tubes to sturdy metal canisters. Even the metal canister had two different types, one tall cylindrical similar to the Romanian and Italian carriers of the time period and a short but wide rectangular with rounded side.

The masks could be purchased by civilians as it was primarily intended for, but it was used by the civil defence and by the industry as well.

After Nazy Germany annexed Czechoslovakia some masks were reused in the civil defence. The filters of the masks usually sports a German marking.

In the Netherlands Cidex N.V. company imported the mask from Fatra for civilians and was called Rijkskeur 019.

Stamp on the filter.

Manual.
Add a photo to this gallery

After the war in Poland, it was used until the 1950s by auxiliary firefighting brigades.

The Yugoslav M-1 is the licensed copy of this mask.

Retrieved from "https://gasmaskandrespirator.fandom.com/wiki/FM-1?oldid=43918"
Community content is available under CC-BY-SA unless otherwise noted.