The Czechoslovak FM-3 was mainly produced for industrial and civilian purposes.

The facepiece is made of moulded gray rubber. The round triplex eyepieces are held by black painted steel assemblies. The valve house is made of bakelite and clamped to the faceblank with a single metal strip. Instead of the Tissot-tube system on the previous FM-1 and FM-2 there is a bakelite cone on the intake which only allows the air to go upwards, defogging the eyepieces when inhaling. The 6 point head harness was simplified as well. The rubberised bands connect to moulded in metal buckles, there is a clamped metal part on the end of each strap which stops it in the buckle. There are two slabs on the back where the straps connect to and the harness can be adjusted there by two pull tabs. 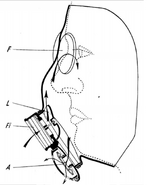 The same as the normal FM-3 but it has a gray stockinette cover on the rubber and it has a carring carrying strap which connects to the bottom strap.

Not much is known about it.

It has textured faceblank. Also called as Lidová C.

Note the moulded Fatra logo on the side.
Add a photo to this gallery

The rubber was made thicker near the buckles to make the faceblank stronger. 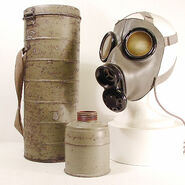 Several markings can be found on the mask, the most notable is the "FATRA" logo on the exhale valve (only on the ones which were made by Fatra). Most of them are stamps with legal and quality control meanings. The size of the mask can be found on the left temple (1-2-3).

Inside of the mask, "zákonem chráněno" (protected by law)
Add a photo to this gallery

Mostly FF-3 and CHF-1 filters were used with this mask.

Carriers for the mask vary, probably depending on the price, from cardboard tubes to sturdy metal canisters. Even the metal canister had two different types, one tall cylindrical similar to the Romanian and Italian carriers of the time period and a short but wide rectangular with rounded side.

Short but wide rectangular carrier with rounded side.

Fatra logo on the lid.

Placing of the mask and the filter.

Short manual.
Add a photo to this gallery

Export and foreign use Edit 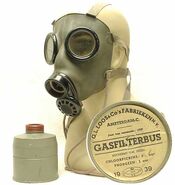 G.L. Loos & Co. Fabrieken N.V. paper on the bottom of the filter.

It was called Arbejdsgasmaske Model F (Work gas mask Model F) in Denmark. The Danish government imported a bigger amount of FM-3 masks and with CHF-1 filters because the domestically produced M.1931 and M.1938 couldn't be produced in enough great numbers. 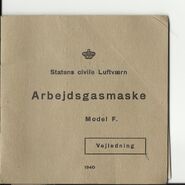 Finland imported FM-3d masks from Fatra in 1940-1941 probably because of the Winter War. The masks don't have any special markings but the CHF-1 filters which came with the mask have a SA stamp (Finnish: Suomen Armeija - Army of Finland). These masks also came with thread converters because Finland used 40mm filters while the FM-3 have 42mm connection.

The mask with the converter threaded in.
Add a photo to this gallery

After Germany invaded Czechoslovakia some masks were used by the Luftschutz (Nazi German Civil Defence) and by anti-aircraft units. On these masks, the Waffenamt proof stamp can be found.

Note the Chema logo on the side of the faceblank.

Advertisement about the Chema C.
Add a photo to this gallery 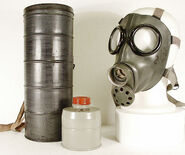 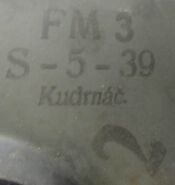 French licensed FM-3 for civilians. There are two variants, one with black faceblank and the other with gray.

The Bulgarian subfactory of Chema in Sofia produced FM-3d masks and CHF-1 filters with DIN 40mm thread. The designation is unknown but there are speculations about that it is the Typ V however this is not official. These were marked with a stamp "ХЕМА софия" (Chema Sofia). The valve house for the Typ III and Typ IV were produced here as well. 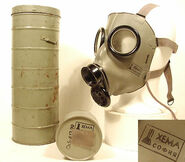 The valve house of a Typ III.
Add a photo to this gallery

Not much is known about the development of this mask but it is clearly visible that the facepiece is based on the FM-3. The valve housing is different and the exhale valve is on the right cheek. It is also not known if the mask was just copied or licensed.

Looted Chinese masks were used after the Japanese invasion of China.

Retrieved from "https://gasmaskandrespirator.fandom.com/wiki/FM-3?oldid=43913"
Community content is available under CC-BY-SA unless otherwise noted.