Developed in the early 1990s by Avon Protection, the FM12 is a mid 4th gen [missing reference] respirator, it was initially planned to try and sell it to the British MoD as a replacement to the S10, however the MoD did not view it as a significant enough upgrade and thus Avon moved to have the mask trialed by other countries and subsequently turned it into Avon's first commercially available mask. The FM12 is more compact compared to the S10, trimming out most of the unneeded bulk and making it significantly lighter.

The FM12 strap system consists of a fabric-elastic harness secured in place by a 6 point harness system. The FM12 was one of the first harness systems to use the "skullcap" style, which has proven to be extremely popular in recent years. The FM12 harness was adopted by the Australian military for use on the ADF-10.

The FM12 came in 3 sizes, 1 2 and 3. 1 being large 2 medium and 3 small, advertised by Avon to fit 95% of every adult person, with the most popular size being 2. Interestingly, the British military issued size 3 for people with extremely small faces, while rarely.

The FM12 features low profile poly-carbonate eye pieces which sit close to the face, these provide an ample field of view and are resistant to damage. When new, these have stickers on them both to protect the lenses from any undue wear and to signify that the lenses are new.

The facepiece is made out of butyl rubber, meaning that the FM12 lacks the need for any type of face form and provides resistance to corrosive agents.

The mask ended up being issued with a wide variety of haversacks and bags, some of which are listed in what nations adopted it but everything from a dedicated Black PLCE haversack to surplus M40 bags were used with the FM12.

The first nation to adopt the FM12 was Denmark (designated ABC Beskyttelsesmaske, M/93) which issued the FM12 in a M/84 camouflage haversack and was used until circa 2020 where it was fully replaced by the M/18 (Scott GSR). It is assumed that the next nation to adopt the FM12 was the Netherlands to replace its aging C3 stocks, the mask was issued with a Dutch DPM haversack, Trials to replace the FM12 in Dutch service are currently ongoing. Belgium adopted the mask sometime in the late 1990s after the failure of the BEM-4GP and Engicom's subsequent contract termination. The adoption date of the FM12 by the Norwegian military is currently unknown but assumed to be sometime in the 1990's.

The FM12 also quickly saw adoption by police forces around America and Europe, with many British police forces adopting it sometime in the 2000's to replace both S10s and the few S6's still in use, it has also proved popular in America with many police departments adopting the mask. The FM12 has also been sighted in use by private security companies and PMC's.

The FM12's Primary Speech Module Cover is not to dissimilar to the S10's, but slightly reduced in size. Both of them operate in the same way with Avons patented "speech horn", cutting out the need for any type of speech diaphragm. They also provide low breathing resistance and deflect the air as to not accidently give somebody a face full of moisture. A selection of different colours for the PSU cover were offered by Avon to be used for rank identification (mainly used by police) the colours available include but are not limited to, White, Teal, Dark Blue, Old Gold, Yellow, Red, Magenta, Green and Grey, however more may exist.

The FM12 offers two different configurations of filter port, one being the classic 2 port with blanking plug mainly used by military and slightly more expensive than the single port with clansman microphone port, which mainly saw use by police and other civilian agencies. However, the mask was also issued with a filter plug that can be easily removed and switched from side to side. This also allowed dual loaded filters, for heavily contaminated areas. The FM12 takes standard 40mm STANAG thread filters. The FM12 was also issued with a wide range of different filters depending on need by the user, sometimes making use of surplus stocks, including but not limited to, BEM-4GP style filters (Belgium) CBRNF12 Filters (Netherlands and Police), PS10 filters (Police, mainly British), M/05 filters (Type of Scott P2K filter, Denmark) unidentified filter (Norway), C2A1 filters (Police, mainly American). Due to how widely used this mask is it is impossible to list every single type of filter (mainly due to police usage) so assume that most semi modern industrial filters might have been used with the FM12 at some point.

The CT12 is the successor to the SF10 and is used in the UK by the armed forces, police, and civilian operators. It has also been seen in use with various police and counter-terrorism forces worldwide.

The CT12, like the SF10, has angled polycarbonate lenses. The 40mm filter mounts have a lower profile compared to those on the SF10 and the PSM/SSM (Primary Speech Module/Secondary Speech Module) is removable, allowing the wearer to change the filter position. The masks can be found on the collector's markets but when found they usually have a high asking price. 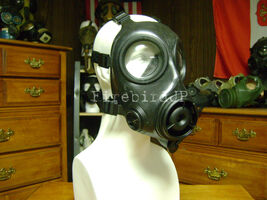 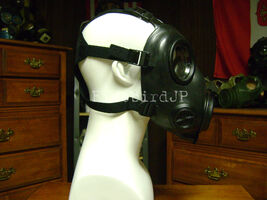 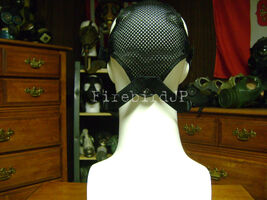 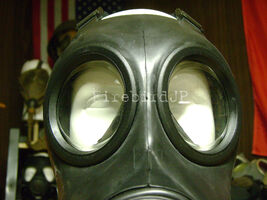 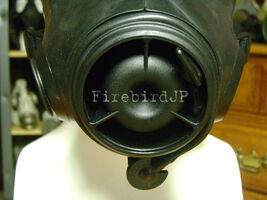 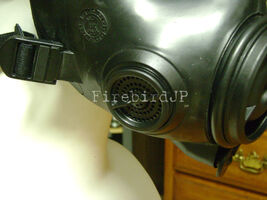 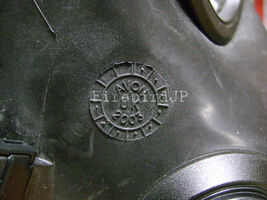 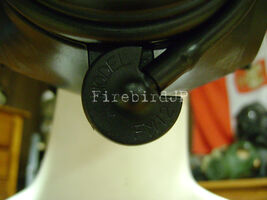 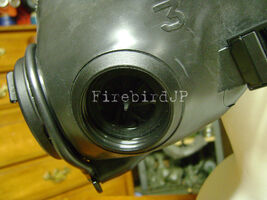 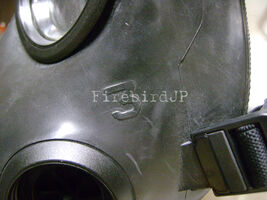 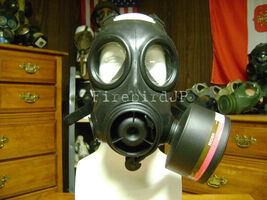 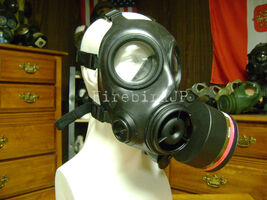 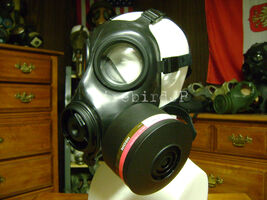 Another 3/4th with filter 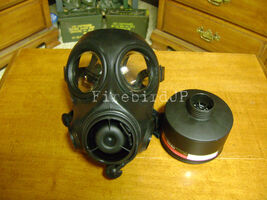 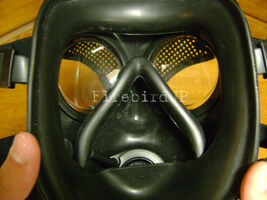 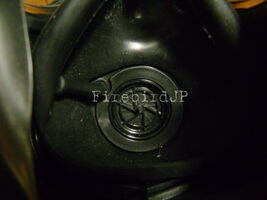 Detail on the voicemitter and drinking stem 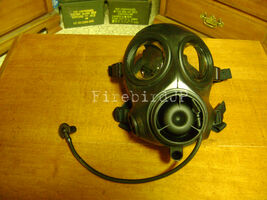 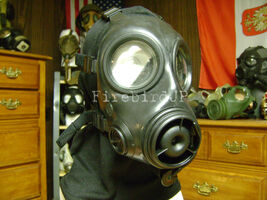 FM12 over top a Blackhawk Nomex Balaclava (For display purposes) 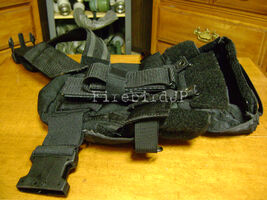 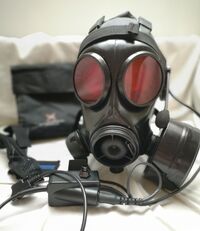 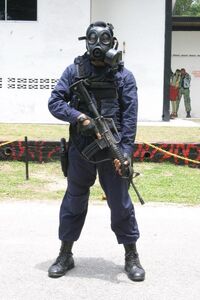 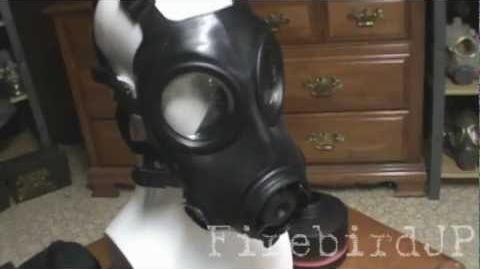 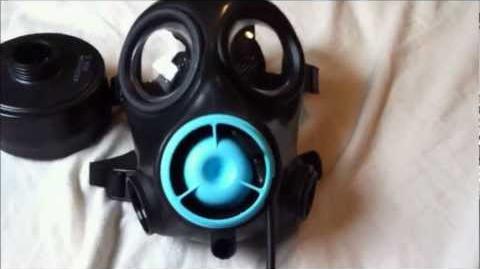