The German Ledermaske (leather mask, retrospectively also called Ledershutzmaske by mistake) was introduced in 1917 to combat chemical weapons used by both sides in the First World War. It replaced the GM15 mask.

The mask is made of tanned sheepskin (due to rubber shortage) and is dipped in an oil sealant. The celluloid lenses have an inner-frame. There is no inlet valve or exhale valve, and because of that, the user has to blow out the air through the peripheral seal and the filter. It has a 6 point head harness. The purpose of the sting on the front of the mask is to prevent sagging the filter too much. The same eyepieces and valve house was used on the Gasschutzhaube.

This later filter was updated to be more effective against new chemical agents that appeared in the later years of the war. The steel canister now contains 3 layers separated with steel sieves. The first layer is activated carbon soaked with 40% potassium carbonate just like in the Model 1915. The next, the middle layer, is pure activated carbon. The third layer contains diatomite soaked with 40% potassium carbonate, hexamine and piperasine.

The mask was issued in a cylindrical canister box with a very simple strap.

The German Empire used the mask in great quantities and after the war it was used for training.

Few (lesser than GM15) masks were bought from Germany by Austria-Hungary and were issued to the army. Not to be confused with Hungarian used 17M masks which had the same designation, 18M.

Repaired 17M (later called by the Hungarian army as 18M) and 18M masks. The first "Hungarian" mask after the First World War. Not much more known about this gas mask. Only two documents prove its existence. The first reference talks about the cost of the repaired rubber and leather masks, filters and its boxes (1929. September 07.). The second one talks about the issuing of antifog soap instead of antifog inserts for 28M and 27M masks (1933. May 01.). Both references talk about the boxes of the 27M (the 17M was issued with a metal carrying box).

Some reconditioned GM17 masks, which had an added exhale valve and a new filter, were purchased by the Spanish army and used during the Rif war. Later, at the beginning of the Spanish Civil War, the Francoist troops located in Marocco still had their GM17s and brought them to the mainland, where they were issued probably until the end of the war. 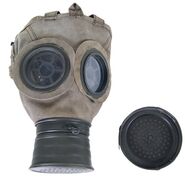 A replica GM17.
Add a photo to this gallery

Retrieved from "https://gasmaskandrespirator.fandom.com/wiki/GM17?oldid=43744"
Community content is available under CC-BY-SA unless otherwise noted.