The GM24 was the first German mask after the First World War. It was issued to the Reichsheer (Imperial army), later to the Heer (Army) and to other ground forces.

It is a full face mask made of rubber-coated light brown canvas. The eyepieces are in metal assemblies with antifog insert fixing ring. The harness uses a three-piece adjustable harness, an additional strap near the bottom would be wrapped around the user's head and hooked around to provide a tight seal. There is a carry strap on the bottom back. The valves are in one green painted metal piece. The exhale is under of the 40mm intake. Size 1 is the biggest and size 4 is the smallest.

The GM24 filter is a big flat canister filter connected by a hose to the mask.

Two types of bags were issued. The normal infantry one is relatively big (due to the hose and the filter). It was made of canvas. The Kavallerietasche (cavalry bag) is much more compact. The hose has a cover which is the bag of the facepiece too. While the filter has a leather protecting cover. The Kavallerietasche was issued to the air defence too.

The Hungarian 28M is the licensed variant manufactured by Merkur Vegyiművek. 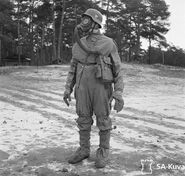 German soldier with a GM24 and a light gas protective suit

GM24 in use
Add a photo to this gallery

Retrieved from "https://gasmaskandrespirator.fandom.com/wiki/GM24?oldid=43839"
Community content is available under CC-BY-SA unless otherwise noted.