The facepiece is made of rubber-coated canvas with metal assemblies holding the most likely triplex glass eyepieces in place. The valve house is made of metal as well, the exhale is on top of the intake which connects to the fixed hose (the later ones has threaded intake). The mask features a five-point adjustable harness. There's a civilian mask similar to the GM33 called C-maske.

The mask and the filter connect to each other via hose fixed on both sides. The filter itself has a very interesting design. The whole canvas side of the filter is the intake resulting in very low breathing resistance.

Other than the mask, filter and bag the kit is mostly unknown but it is highly possible that it contained antifog inserts or soap too. 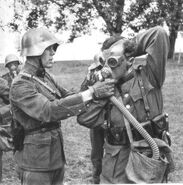 Training.
Add a photo to this gallery

Retrieved from "https://gasmaskandrespirator.fandom.com/wiki/GM33?oldid=27182"
Community content is available under CC-BY-SA unless otherwise noted.