The facepiece was made entirely from rubber. The metal parts on this mask have a variety of colours, which represent why they were used. Masks with tan painted parts were used in the tropics of Africa in World War II. The mask has a 5-pointed strap harness which is tightened with two straps in the mid-section and another two near the bottom. The mask was issued in a canister which was carried around the neck but the mask also has its own carrying strap with which it could be carried. 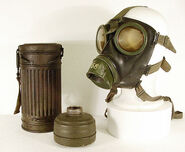 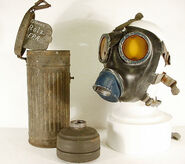 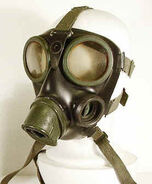 The GM38 was issued with the fourth, tall, type canister. The other canisters remained in service at the same time with GM30 masks, getting gradually replaced with newer canister as the war progressed.

The first model the Reichswehr and Wehrmacht canisters used between 1930-35 are around 26 cm high with a diameter of around 12 cm. 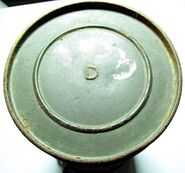 Waterproof canister with the "D" marking.

The GM38 was created as a successor to the GM30 and was issued to the Wehrmacht and to other branches in Nazi Germany, however never fully replaced the GM30. Later it was issued to the Bundeswehr till it was succeeded by the GM54.

The mask was used for protecting the user's face from the backblast of the rocket leaving the tube of the RPzB 54 Ofenrohr ("stovepipe" - early Panzerschreck without protecting shield).

In concentration camps like Auschwitz, the mask was used by the guards when dealing with Zyklon B, it required a special "J" filter.

Soldiers on the Eastern front would sometimes wear the gas mask without a filter as a mean of protection from the cold. 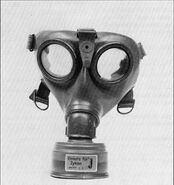 GM38 with "J" filter against Zyklon B. 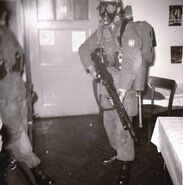 GM38 in use by Bundeswehr

The GM38 was used among members of the CF under the designation of M/45 Tysk Model. It was primarily issued to those who didn't fit the M/45 Engelsk Model, which was predominantly only made in one size. Due to preference and logistics, the M/45 Tysk Model would be issued to the individuals in Light Anti Gas Respirator carriers.

The M/45 Tysk Model differs from standard GM38's in a number of ways, but most specifically in that the hardware was repainted grey, and that the right cheek, like the M/45 Engelsk Model, was stamped with a red marking depicting a crown with C.F. marked beneath it, all inside a red circle. Repairs would also occur, with the most common being replaced lenses. The replaced lenses can be told apart from them being flat, not bowling out slightly like how original German lenses do. The masks are also often missing the fabric chinstrap.

Later on, to standardize filters, it was decided to adopt additional filters in 40mm DIN and 60-40mm adaptors to bridge the gap between Army filters, C.F. filters and the two separate filter threads that the C.F. used. This lead to the /65 modifier being added to the M/45 Engelsk Model for when the thread adaptor was present, resulting in the M/45/65.

The GM38 saw use in the Danish Navy, particularly among damage control groups, and were often issued with oxygen supply tanks. The masks were later replaced by the M/49, and thus handed over to the CF.

Detail on the stamp.

The GM38 has been produced in Czechoslovakia since the time Germany annexed it by a company named Fatra (factory code "ebd"). After the fall of the Reich, the production stopped. However, in late 1945, the production of the GM38, along with the Vz.35, has been restarted at the GuZu plant in Zubří, and ran until 1951. The gasmask, both newly produced and old German stock, entered service with the Czech army in May 1945, under the name Vz.38N (Vzor 1938, Německá - Model 1938 German)]. The postwar production was virtually unchanged from the wartime ones, and can only be distinguished by the marking. Whilst in Czech service, the kit was identical to German ones, again, only distinguishable by the markings. The mask was made obsolete in 1952, when, during modernization, the Czech army got rid of all gas masks that weren't 40mm GOST. 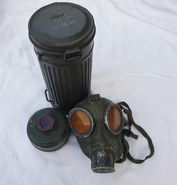 Czechoslovak reused GM38 kit. Note the stamping on the lid saying it was put into use in 1938