Like many other nations involved in WWII, there was a need to develop optical gas masks to be used in conjunction with binoculars, scopes and range finders.

The German optical gas mask, most often known as the "optische Gasmaske", is a Dräger mask made from a leather facepiece with a fabric and leather head harness and has an intra-ocular adjustment rod for the small circular eyepieces, a similar design to the US MI optical mask.

Behind the eyepieces are eyecups which aided the wearer when using binoculars. Like some of the rare variants of the GM30, the "optische Gasmaske" has a threaded microphone inlet that can be closed when not in use.

A rubber hose is used with the mask and positioned so it can be worn over the shoulder and the filter attached to the back. The filter is either a large box type or the FE 41 type.

There are two different containers the mask was stored in, a green Dräger container and a wooden one. With every optical mask issued there were a set of four eyepiece adapters for use with various equipment. The optical was primarily used by the Kriegsmarine and in U-Boots but apparently adopted by the German Army late in the war.

It is unknown how many of these masks were made, they are somewhat scarce these days but most surviving examples that surface from time to time are usually in very good condition, though the rubber hose is often found deteriorated. It should also be noted that there exist several variants of this mask. 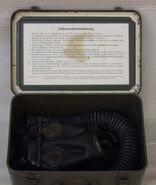 Kit
Add a photo to this gallery
Retrieved from "https://gasmaskandrespirator.fandom.com/wiki/GM44?oldid=41457"
Community content is available under CC-BY-SA unless otherwise noted.