The GP-5 (Russian: Гражданский Противогаз — "Civilian Gas Mask") is a gas mask kit, manufactured from 1962 to 1990 by the Soviet Union, issued and stored for civil defence usage. The gas mask itself was initially the ShM-62, which was replaced by the ShM-62U.

The GP-5 was designed to protect civilians of the Soviet Union from radioactive fallout during the Cold War. The GP-5 and other Soviet masks were designed to look like skulls to psychologically impact their enemies when used in combat, Especially the GP series. This mask is a helmet-type mask which was made in white rubber. The lenses of these masks are held in place by crimped metal rims, crimped onto the rubber of the mask. The bottom of the mask is made of metal, and in it is the 40mm filter input, and the inhale and exhale valves. Air entered through the inhale valve, passed into the mask though tissot tubes under the lenses and was breathed out through the exhale valve. The lenses are easily fogged up and to prevent this anti-fogging lens inserts were issued with the mask.

The gas mask, being of the "helmet" type, requires it to have strong elasticity, and must be stretched over the head for it to be worn. This allows for a secure fit, but can make the mask uncomfortable to use for long periods of time. The mask itself is made of latex rubber, and thus it naturally adheres well to the skin which ensures an airtight seal. This, however, can make it difficult to wear for a person with long hair, as the rubber will cling to hair strands and can make it both painful and frustrating to put on. Because of this, it is more suitable to people with short hair. The face piece of this mask was designated SHM-62(early version of the face piece/SHM-62u (newer upgraded version of the face piece, also the u stands for upgraded). The difference between these two face pieces is that SHM-62 was made with more rubber(rubber is thicker) thus making the rubber less flexible and uncomfortable. The SHM-62 featured less rubber, so it was more flexible and weighed less. One of the ways to tell which one you have it to look at the size marking, if the size marking is just 2 (for example) it is the early version and if the size marking is 2y ( y added at the end) that means its the upgraded version). 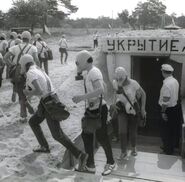 Students training in chemical self defense. 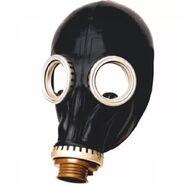 ShMP, black variation of ShM-62U
Add a photo to this gallery

The mask was issued in a very basic green fabric bag with two straps, one to hold the bag over the shoulder, and the other to keep it tight around the waist, preventing it from moving around as the person walked. The bag also had two pockets, one for a IPP-1 or IPP-8 decontamination kit, and the other for bandages or AI-2 aptechka(soviet medkit) adn the pocket featured a smaller one inside for keeping the anti-fogging lens inserts, issued with the mask to prevent the lenses fogging when the user exhaled.

The GP-5 kit included a 40mm GOST filter (itself designated as GP-5). Unusually for a Soviet mask, the inlet also takes a STANAG 4155 threaded filter, albeit tightly.

Lab reports from the Netherlands and Finland have confirmed the presence of asbestos in the GP-5 filter, in both the particulate filter, and the activated carbon, in filters produced up to at least 1988.[2] [3]

The GP-5m kit was issued with the ShM-66MU, which differs from the ShM-62U by the addition of a voice diaphragm and holes for ears. The military kit, designated PMG-2, was completed with a PMG type G bag, and a EO-62K filter, similar in appearance to the GP-5 filter.[4].

Soviet-manufactured GP-5 kits were imported and sold in the United States by Evirstar Defense Products as current CBRN protection, despite the age of the masks and contents of the filters.

The first person shooter Team Fortress 2 features the GP-5 as a wearable item for the Pyro class, known as Foster's Facade (a reference to the Killing Floor series' Mr.Foster, who is also seen wearing the mask)

Retrieved from "https://gasmaskandrespirator.fandom.com/wiki/GP-5?oldid=19608"
Community content is available under CC-BY-SA unless otherwise noted.