Beginning in 2003 the development of the GSR was started by Design Reality (with assistance from Porton Down), who were contracted by Scott to produce prototypes and designs for the GSR which eventually lead to the current iteration of the GSR. Interestingly Design Reality was not a PPE designer or manufacturer of any sort, which may explain some of the unique design aspects of the GSR.

While the shape of the GSR began to take form into what we know today it went through several possible prototypes with the later ones being destinctly close to the serial production GSR until around 2006 when the basic design was solidified and completely finalised by approximately 2008 in the honnington trials. Various issues and production holdups lead to relatively low production volumes until 2012 with the original mass issue date being pushed back several times. The GSR eventually completely replaced the S10 in 2014 with the British army after the reserves were issued them.

The GSR was officially adopted on 2010-08-26 and training was started in the following year. British Forces Germany were the first to field the mask.

All recruits are trained in the use of the respirator, and existing personnel received refresher training.

Due to Scott's substandard quality control and materials in 2018 a 5-year £18 million contract for an inital 15,380 GSR's was awarded to Avon protection systems with options for further batches in the future. Certain sources say production started in 2018 however merely pre production and test examples along with service & support were produced and started then with full scale production starting some time between Feburary and July 2020. Along with GSR production the 2018 contract had Avon take over resupply and in-service support for the respirators which began in 2019.

The filter design on the GSR is vastly different to most military respirators on the market at the current time. The filters (pictured below) have a lock system which allows filters to be swapped out more quickly and efficiently than the old threaded filters. The GSRe / GSReS variants can also be converted in the field to take more conventional NATO threaded canisters. Filters have a 15 year shelf life when sealed and 4 months unsealed.

The GSR is an ambidextrous mask as either filter can be rotated to face up to accommodate looking through optics on any weapon system. The GSR also prevents breathing through an inlet if there isn't a filter attached, in order to reduce the risk of accidental inhalation of CBRN particles in the air. It also includes a drinking tube. 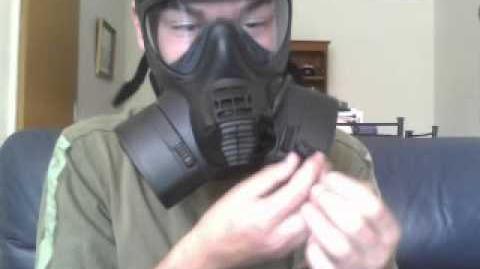 Retrieved from "https://gasmaskandrespirator.fandom.com/wiki/GSR?oldid=50922"
Community content is available under CC-BY-SA unless otherwise noted.