The IP-46 was a Soviet CCR (Closed Circuit Rebreather) that was used mainly underwater for tank crews. It was used in many Warsaw Pact countries.

The IP-46 insulating breathing apparatus has been manufactured serially in the Soviet Union and has been designed to protect individuals in areas with oxygen deprivation, poisonous contaminants, radioactive substances, and biological warfare agents. An important function of the device was that the IP-46-M allowed work under water to a depth of 6 m. This was used after the introduction of the device to CSLA, when it was used by tank crews.

The device is packed in a carry case and consists of a full head rubber cheek with a corrugated hose and a breathing bag with an additional oxygen supply device and a pressure relief valve. There is also a regeneration cartridge. The breathing bag served as a reservoir of air and oxygen released by regenerative cartridges. They also served to absorb water vapor and carbon dioxide from exhaled air. An additional dose of oxygen was used to fill the breathing bag when immersed deeply. At the same time, however, it also replenished the supply of oxygen when it was deficient in the respiratory bag or in the use of regenerative cartridges. There are two spare oxygen feed devices on the IP-46-M. It can inflate the breathing bag with oxygen quickly and only works under water. There are some other differences between the two types. On the IP-46 the hose is longer. The nose clip on the IP-46 is fixed to the mouth part on the M to the mouth piece. On the IP-46-M there is a regenerative cartridge warming blanket. The facepiece was made in four sizes and called ШВСМ (ShVSM).

It gave protection for:

It was in service in most Warsaw Pact countries. Hungary used the IP-46 between 1963-1966 and the IP-46M between 1963-1985. Romania used the IP-64 as IM-46 (Romanian: Mască Izolantă - "insulation mask") with domestically manufactured bags which were darker green. Poland, Czechoslovakia and Bulgaria also used the device. 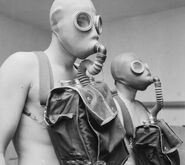 Standard land variant of the IP-46.

Retrieved from "https://gasmaskandrespirator.fandom.com/wiki/IP-46?oldid=42648"
Community content is available under CC-BY-SA unless otherwise noted.