IP-5 (ShIP-M) Soviet Russian Military Rebreather Gas Mask was used by the Soviet Union and several other Warsaw Pact countries. The IP-5 is a closed system rebreather which allows the wearer to survive in a low Oxygen environment for up to 2 hours. (This includes underwater usage) A traditional gas mask works by filtering impurities from the incoming air which has to include oxygen otherwise the wearer would suffocate.

The IP-5 does away with the need for Oxygen, as it is fitted with an oxygen-generating canister. The rebreather canister scrubs exhaled air of impurities by way of a chemical reaction. Regenerated fresh oxygen is fed back up through the bladder and around the system again. Note: The canisters are known to get hot during operation, due to the chemical reaction taking place inside.
The IP-5 is a larger unit than the previous model, the IP-46 and most likely could be used for a longer period of time. A large rebreathing bladder was worn around the neck and inflated via a large oxygen-generating canister that was strapped to the wearer's chest. It is heavy and outdated and it is dangerous to use it. The complete set includes; the mask, with bladder and hoses (as pictured) a carry bag and cartridges.

The whole set weighs a lot so a good strong carrying bag to keep it safe and secure is essential. This setup comes with two separate bags. An inner canvas tie-top bag for keeping a wet mask and bladder away from everything else one presumes. Then, there is the main plastic-coated canvas outer bag with shoulder straps.

The ShIP-M facepiece is made from the same latex rubber as the other Russian full cover hoods. Although similar to the GP-5 mask, it also features a fixed hose system, extra securing straps, and doesn't have an exhale valve.

The size number 2 (medium) is slightly smaller than the normal size 2.

The bladder itself is fitted with an outer cover which has holes where five ports poke through. Two ports at the bottom of the bladder (as worn) connect to the two on the cannister. There is a port in the front centre of the bladder for the mask hose to connect to. A metal collar around the mask's hose-end screws into the port clamping the hose end in place. The remaining two ports are for the O2 cartridges. These are bunged up with metal caps (see the picture). On the right-hand side of the bladder is a metal valve which is partly visible through another hole in the outer cover of the bladder.

Oxygen Generating Canister RP-5M: The basic concept is that there is a canister containing a chemical that reacts with CO2 to yield O2 (One example is Potassium Superoxide KO2 which forms Potassium Carbonate using CO2) or two chemicals where one absorbs CO2 and the other releases O2 over time, or a chemical generates O2 and the CO2 is vented. Also, make sure not to touch the gas cartridge if you've activated it as most chemical oxygen supplying reactions produce a whole lot of heat, also don't let water get in them as Potassium Superoxide bursts into flames on contact with water, which may cause an explosion killing the wearer. Potassium superoxide (CAS 12030-88-5) is a strong oxidiser and can ignite react explosively with hydrocarbons (oil, alcohols etc).

Canister in position (no tubes attached yet). 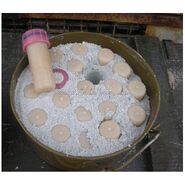 Oxigen cartridges.
Add a photo to this gallery

Retrieved from "https://gasmaskandrespirator.fandom.com/wiki/IP-5?oldid=41162"
Community content is available under CC-BY-SA unless otherwise noted.