The Leder B-Maske is a German multi-purpose facepiece designed initially for industrial use but later adopted around the world by various armies. It was designed by Dräger around 1925 but later it was manufactured by Auer and its sub factories too. Because of the economical problems in the 20s leather was the cheapest option to make gas masks. When exported, it was either sold directly by Dräger or Auer or alternatively it was sold through a third-party company that'd either retail German masks or produce its own.

Close relatives to this mask are the Leder O-Maske and the Gummi B-maske, with the first having a single circular lens with a wiper and the second being made of rubber.

The faceblank is made of resin/oil-treated cow leather, the colour of which could vary between black, brown, dirty orange and red, depending on the production date. There are no seams like on the rubberized canvas masks because the leather was specially wet-moulded to that shape.

The filter connection, usually made of cast aluminium, is located on the chin, it can sport a 40mm DIN thread or more commonly a specialized central thread attachment piece used with breathing apparatuses or alternatively a dedicated connector.

On most models, the eyepieces are egg-shaped ("Eiform"), while occasionally some are round ("rund"). In both cases, they'd be pressed to the facepiece with a metal assembly and would be provided in either cellulose or triplex glass. A third type of eyepieces was produced for special uses, the sideways egg-shaped type ("Eiform quer"); no existing sample of this last type has been found yet.

The adjustable, canvas 5-point (3 on the front, 2 on the temples) head harness is connected to a leather or canvas centrepiece on the back which features a metal hook, to this, the neck strap can be hooked up making the mask more stable. On the very last pattern of Leder B-maskes the 5-strap harness with neck strap system was replaced with a single 5-point (1 in the front, 2 on the temples, 2 on the cheeks) head harness, adjustable from the facepiece and made of rubber. All types also feature a carry strap under the main straps.

Some masks feature a “glimmer” type exhale valve under the left eyepiece; this feature was present whenever a facepiece was to be used with a regular filter and no valve was present on the connector. Another interesting aspect is that the carrying strap and neck strap are sewn together on some models, but this is not a common occurrence.

The original patent by Dräger from 6th January 1926.

Inside of a typical Leder B-Maske. 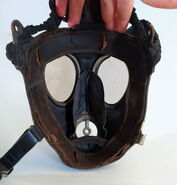 Patent marking on the forehead 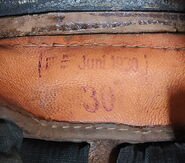 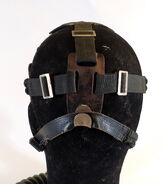 Back of a typical harness 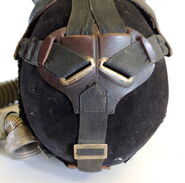 Top of a typical harness

Inside of a late model with the rubber harness

This type was mostly used with German-made rebreathers, like the Dräger KG rebreather series and Degea Audos MR rebreather series, hence the special central thread on the mask because to that the mouthpiece of the rebreather was connected. These ones are lacking any exhale valve because that would compromise the circuit of the rebreather and were equipped with an oral-nasal cup to help prevent fogging and most importantly to reduce the dead space inside the mask, thus reducing the CO2 in the inhaled air and improving the user's performance.

Leder B-Maskes with central thread and exhale valve were equipped with an intermediate piece connecting to the mask as a rebreather piece would. On its other end, there was either a 40mm DIN thread allowing the use of filters directly or a hose connection port. On these masks the exhale valve could be on the left side of the facepiece, on the connector, or in some cases completely absent. These masks may also occasionally lack the oral-nasal cup.

Dräger made mask from the late '20s, with exhale valve and intermediate connector.

Central threaded facepiece made in the '30s 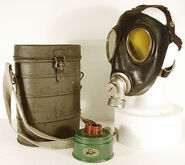 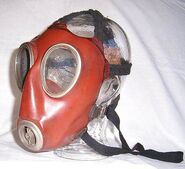 Red variant made by Dräger in 1958 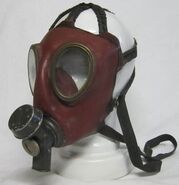 Few Leder B-maskes were made in this configuration, probably due to the popularity the intermediate connector enjoyed. Two variants were made, one with a simple 40mm thread instead of the central thread, and one with a downwards-angled 40mm thread, like on the Austrian M.34 masks. The exhale valve was not always present. 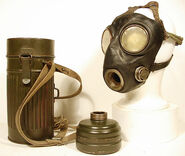 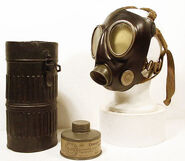 To make the mask more universal, there was a type with a universal connector. This connector featured a central thread for rebreathers and a 40mm DIN thread for filters and hoses. This type was mostly used by the fire brigade. 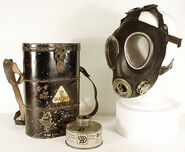 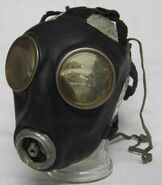 This variant sported a permanently-attached filter in the front part of the mask. The substances could be replaced. 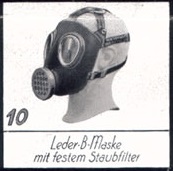 This category includes all the main adopters of the Leder B-Maske; this includes mainly military and firefighting use, but also countries that used this mask in an industrial context to a relevant degree.

In Germany the biggest user was the industry just like it was intended by Dräger. However it was a common mask choice by firefighters and before the standardization in the Luftschutz as well. 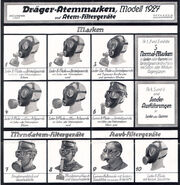 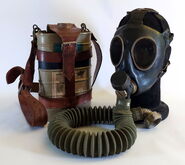 Journalists near an industrial accident in 1930.

Leder B-Maske with central thread, short corrugated hose, exhale valve on the connector, big filter and the bag is worn on the chest. It was the successor of the M.17.

Same as M.27 but the hose is longer and the bag is worn on the hip. The filter is slightly modernised.

The mask was modernised again to fit better for new needs. It got a 40mm DIN filter connection and a "glimmer" type exhale valve as well. Some M.34 are retrofitted M.27 and M.29. It used the Austrian made variant of the Dräger Nr. 89 filter with Nr. 1004 particle filter. 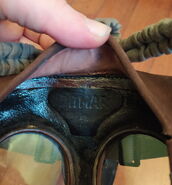 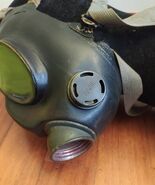 Detail of the outlet valve (note the Ditmar marking) 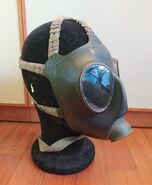 Two M.34s along with an industrial Leder B-maske being used

The Koninklijke Marine (Dutch Royal Navy) used central threaded masks with hose and big filter. The kits were probably produced by Dräger and distributed by Artillerie-Inrichtingen. Sometimes it was used with Dräger-Tübben rebreathers too.

The carrier bag of the mask can be seen on the hip of the soldiers, Shanghai 1937

Worker cleaning a sewer in Amsterdam

Denmark used two types of this mask, German, most likely Dräger made masks with Dräger KG130 rebreathers. And Austrian, Ditmar made masks as Arbejdsgasmaske Model Ø (Danish: Work gas mask Model Ø) distributed by Statens civile Luftværn (Danish: State Civil Air Force). The Model Ø came in a cylindrical carrying canister. Many different filters were used with it, when Danish (42mm) M.1938 filters were used a 40 to 42mm converter was added, but German and Austrian 40mm filters were also used with it, those had a red-coloured thread to make distinguishing easier.

Danish firefighter using the mask with KG130 rebreather, from a movie [1]. 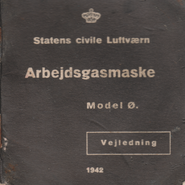 Exactly when and why was it used in Finland is unknown. But there is a great chance that like in China because of the extreme cold the exhale valve froze rendering other masks useless. On one hand, masks lacking an exhale valve are invincible by this issue, but on the other, they'd be much more prone to fogging.

Industrial Leder B-Maskes were sold in Japan through Kawasaki, which collaborated with Dräger. The mask, referred to just as "全面マ ス ク" (meaning "full mask", "vollmaske" in German), was offered in a variety of configurations, for the most part identical to what was offered in by Dräger in Germany.

Various gas masks being tested in Japan. The third mask on the top row from the right is a leder B-maske

In Hungary mostly the central threaded type was imported with Dräger KG rebreather series, Degea Audos MR rebreather series and Erje rebreathers by Vadásztöltény-, Gyutacs- és Fémárugyárt Rt. as the only official Dräger importer in the 1920s and 30s. it was mostly used by the fire brigade, Légoltalmi Liga (civil defence) and mine rescuers. After the war, the facepiece was deemed outdated and was mostly replaced by T.35 mask as a facepiece for breathing apparatus.

Firefighters on a fire truck, both the left and the right firefighters are wearing the mask at Budapest, 1937. 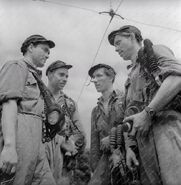 A number of Leder B-Maskes were used with D.T.24 apparatuses by the Italian civil defence, firefighters and Red Cross. Later on they'd get replaced by Italian designs.

Bolivia imported the mask during the Chaco War (1932–1935) while Paraguay produced its own, the AGM. It seems that two models were imported. The central thread variant with hose and big filter. And the 40mm one with a downwards angled filter connector. 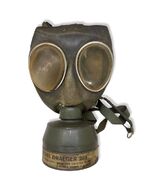 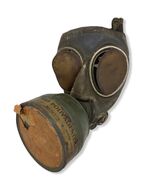 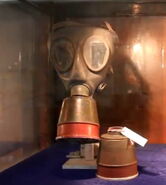