The M-1 gas mask was issued to all military personnel and all civilians from the late 1960s to late 1995. The mask was used during the entirety of the Yugoslav wars. The mask is a direct copy of the US M9A1 Gas Mask, following a trend of that time along with the Finnish M/61 and Swedish Skyddsmask 51. Like the M9, it uses a 60mm thread for the filter. The mask was produced in two models: the M-1, and the MC-1. The only known difference between the two is that the MC-1 lacks the oral-nasal cup. The M-1 gas mask has M-59 marked in raised rubber, while the MC-1 has a white stamp of MC-1 over this marking or, more commonly, black stamped letters MC-1 and the date of manufacture on the left cheek (over the model name and size of the mask). The mask is made of a light greenish blue rubber, and uses a light O.D metal for the lense rims. The filter is the same color as the lense rims. The mask also uses a very simple code along the cheek that shows the mask's production year, batch number, and number of masks produced in that batch. 78-002-007, for example, would mean that the mask was produced in 1978 in batch number 2, and that it is one of the seven masks were produced in that batch. The filters issued with the mask are also marked with date of manufacture and series number- 83-011 would be a series 11 filter made in 1983. The mask uses white fabric tape to help seal around the exhale and inhale ports, whereas the US M9A1 uses a black fabric tape.

There were two versions of the M-1 mask distributed, one earlier version that only included the mask and filter with the bag and the later version with the protection kit. There were two versions of the mask with protective kit- one for civil defense [MC.1], the other probably for military use and also civil defense. The personal protection kit can be distinguished by the different bag, and the markings KOMPLET ZA LIČNU ZAŠTITU GRAĐANA or LIČNI KOMPLET ZA ZAŠTITU GRAĐANA on the front (the MC-1 version of this kit is also marked SA MASKOM MC.1 (or sometimes M1.C)). The personal protection kit includes: M-1 (or MC-1) Gas Mask, Filter, Plastic NBC Protective Cloak, Chemical Bandage, Radiation tester, one large cloth for cleaning along with one small anti-fog cloth, and an instruction manual. Some kits come with the Yugoslavian LPD decontamination kit, while others do not- the exact reasons for this are unknown. The JNA (Yugoslavian People's Army) and civilians used the mask until it was replaced by the M-2 gas mask.

The mask was considered outdated by the time it was issued, because of the major developments that came in the gas mask industry, but it worked for its original purpose as a civil defense mask with protective kit. Videos of riots during the breakup of Yugoslavia show police officers using the M-1 mask to protect themselves from tear gas, which likely means that this was the most accessible gas mask for police and military units as well. After the break up of Yugoslavia, the mask was replaced by the M2 gas mask, followed by the M2-F.

At some point M-1 gas masks were used by Saddam's Iraqi armed forces. Saddam's Iraq had a working relationship with Yugoslavia, and probably purchased gas masks and gas casualty kits from them, as M-1 gas masks evidently used by Iraq and Yugoslavian LPD kits manufactured with arabic markings and instructions, probably made in Yugoslavia to export to Iraq, have been found. Note that Yugoslavian M-1s found in Iraq may be misidentified as 'Iraqi M59s' due to the M-59 marking on the side of the mask.

The M-1 and MC-1 kits are fairly easy to find within the nations of the former Yugoslavia, but are harder to find internationally (specifically in the U.S.). The M-1 protective kit is harder to find than the MC-1 kit.

There also existed a variant with black lense frames and it was also part of the M-71 Cevna maska rebreather kit.

Note: In the video the anti-fog cloth is misidentified as chemical detection paper, and the cleaning cloth is mistaken as a chemical bandage. 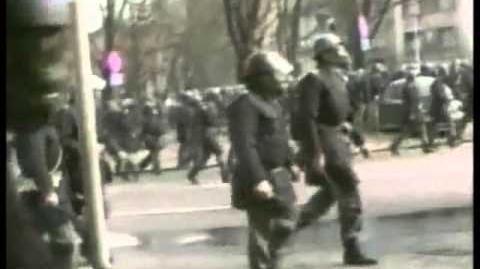 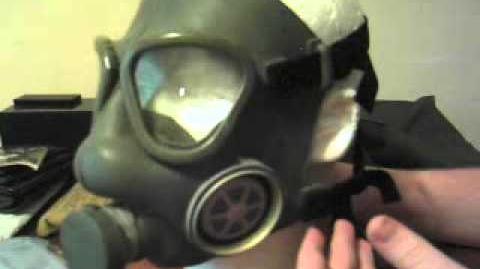 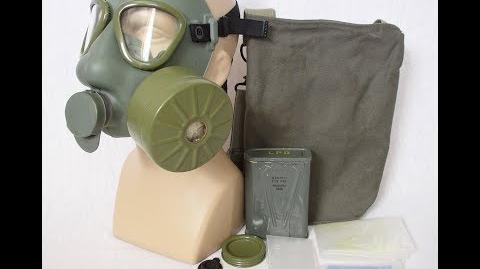 The photocopied manual is from Alexander Ross Galanor.

Translated manual is by Robert Halvorsen using images from the photocopy of Alexander Ross.

Distribution is unlimited so long as proper credit is given to the creators of the documents.

Note from translator [Robert Halvorsen]- The translation is far from perfect, and has been modified for clarity and grammar. I am not a native speaker of Serbo-Croatian, nor am I fluent in it.

Retrieved from "https://gasmaskandrespirator.fandom.com/wiki/M-1?oldid=43643"
Community content is available under CC-BY-SA unless otherwise noted.