2005-in service (Bosnia and Herzegovina)

The M-2 replaced the M-1 in military service in Yugoslavia and was manufactured by Miloje Zakić (Trayal since 1995) in Kruševac, Yugoslavia (now Serbia).

The M-2 was introduced as a modernisation of the ageing M-1. The M-2 features a different faceform, removing some of the excess bulge that is the hallmark of the M9A1 gas mask and its copies. It also feeds the more standard 40mm threaded filters, allowing for standardization. The exhale valve is protected by a plastic housing piece, which replaces the rubber housing of the M-1 mask. The lenses are also slightly different from the M1.

Variants and their kit[]

The kit is very similar to the M-1 kit, except the mask and the filter.

Some M-2 masks were distributed in a kit similar to that of the M-1 and MC-1 Personal Protective Kits. The manufacture dates and number of these kits manufactured is unknown. The kits are marked with the later, plainer marking system. Instead of the 'KOMPLET ZA LIČNU ZAŠTITU GRAÐANA' seen on early model M-1 and MC-1 kits, most M2 personal protective kits are marked with the much shorter 'LIČNI KOMPLET' of the later variant of the MC-1 kit. The manufacturer's mark is still present on the carrier.

The M2F was manufactured in black, rather than green, and the exhale valve was replaced by a plastic assembly incorporating a voice diaphragm, the cover of which features the manufacturer's emblem. The assembly is interchangeable with that of the Finnish M/61, which it's a close copy of.

The M-2FV differs from the M-2F by the addition of a drinking tube.

The M-2FV was issued with a larger carrier with a canteen pocket, patterned with a copy of US M81 Woodland, instead of a tan colour. [3] The M-2FV kit includes:

The CR-M30 kit was issued to military handlers of rocket fuel. The kits were mostly manufactured in 1999. The CR-M30 kit includes:

The M2a is a rare prototype variant of the M2. It's unclear whether the prototype preceded the M2F, M2FV or was abandoned further during M2 development.

For a short time it was the main issue gas mask in the Yugoslav army, however the country broke up shortly after its introduction.

In most Ex-Yugoslav countries the M-2 is still the main issue gas mask, however in Croatia, Serbia and Slovenia it is in reserve.

The armed forces of Egypt use a copy of the M-2 manufactured by the Heliopolis Company under licence. 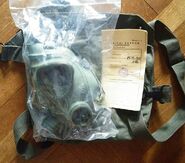 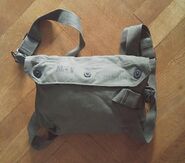 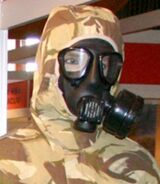 Interior of the M-2FV's carrier. Showing the canteen stored in the pocket. 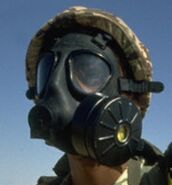 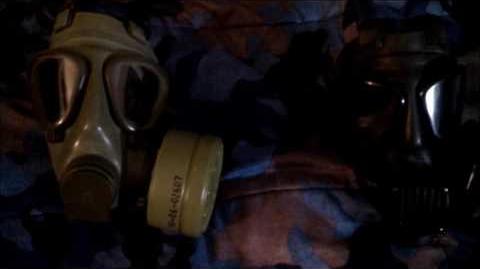 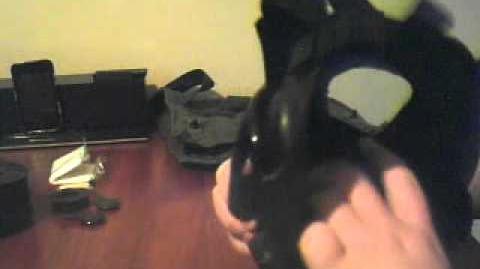