M. 1931 Is a Danish interwar mask, being a further development of the previous M.1926/29, which itself was an improved R.S.C. derivative.

The facepiece is constructed of 2 layers of cotton, with the innermost being treated with boiled linseed oil, and the outermost being rubberised.

The valve-housing is near identical to the M.1926 and made of stamped aluminium.

Early masks were painted an orange-ish brown, whereas later production ones were tan and green. The lens-holders are stamped, threaded on and made of brass, the lenses are of triplex glass.

The harness consists of 5 cotton straps, each with metal springs on the inside to provide elasticity. The straps meet with a cotton band in the back. It also has a nape strap which would go through a brass loop found on the harness, which then hooks onto a hook on the left side of the mask. It also has a neck carrying strap.

The mask had already begun development by 1929, and started initial production in 1930 for testing. Upon approval in 1931, it was quickly put into production, and saw prominent use from 1932 up until the 9th of April, 1940, in spite of the introduction of the M.1938, which would never replace it. In 1938, a formal request to reform the army's uniformity involved the change of colour palettes, resulting in the change of the M.1931's appearance, going from earthy colours of brown and orange to green and tan.

Due to this change, pre-existing inventory had to be replaced, resulting in large quantities of excess M.1931's being sold off as surplus. The surplussed masks could then be found at pharmacies and protective equipment dealers for protection against particles and vapours. Due to their abundance, it became one of the most prominent respirators among civilians in Denmark, only being surpassed by the civilian model M.1938 a few years later.

The kit consists of

The kit is stored in a metal canister, stamped M. 1931 on the lid, and with a female 42mm thread stamped on the inside to store the extra filter in. Earl filters are sealed with wax and cardboard cover, while the later would be sealed with a rubber plug. 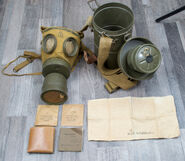 Carrying can top, showing markings, and outside of female thread for storing spare filter.

Carrying can, showing spare filter threaded into can lid - note: missing cardboard cover for accessories in the bottom.

Danish soldier with the mask.

This photo was taken when the Institut Jeanne d'Arc in Copenhagen burned down, 21st of March, 1945. 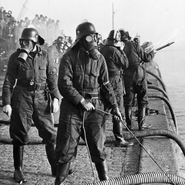