The M.31 was a multi-purpose face piece that succeeded the Penna as the army's main gas mask.

The face piece is made of thick rubber. The eye pieces are made of the same "unbreakable" glass as the later T.35. The mask sports the standard Italian five straps system. At the bottom of the facepiece stands the intake-outtake piece, which houses the exhale valve and the connection to the hose. At the end of the hose stands the M.31 filter, attached with tape.

The mask came in a two-sections satchel, one for the mask and the other for the filter and hose. The filter section had a sloped metal piece to allow airflow to the filter's bottom. The mask also came with a spare exhale valve and either anti-fogging lenses or anti-fogging soap. 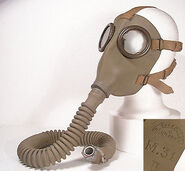 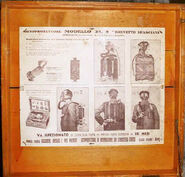 During the Spanish Civil War the M.31 was issued both in the regular configuration and a specially crafted one so to allow the use of German and Spanish filters.

The regular M.31 facepiece was deprived of its oral-nasal cup and its intake-outtake piece, which were substituted with a German GM-30 intake-outtake assembly, making the mask able to accept German 40 mm threaded filters. The mask was issued with a Spanish filter (as seen in the infobox) and either a Spanish bag or a German container. Some times the mask was kit implemented also Italian anti-fogging lenses, depending on the presence or not of metal clamps to support the aforementioned. 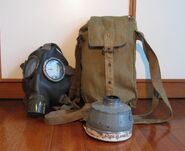 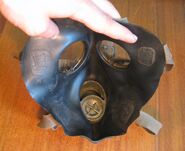 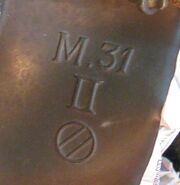 Mask with filter
Add a photo to this gallery
Retrieved from "https://gasmaskandrespirator.fandom.com/wiki/M.31-33?oldid=27036"
Community content is available under CC-BY-SA unless otherwise noted.