The Finnish M/38 was the successor for the M/30 in the military and have many resemblance to the older mask. Its civilian variant is the Vss. 1-12-1.

The facepiece itself is made of moulded orange rubber which is covered by drab colored stockinet material. The glasses are in metal assemblies. The valve house is the one major update compared to the M/30 as it is similar to the one on GM30. It is made of aluminium or on the later ones bakelite. The 40mm intake is on the top while the exhale is on the bottom of the assembly. The harness system is unchanged compared to the M/30 however it is not connected to the edge of the mask but to the side.

The bag was simplified so it is much smaller then the M/30 one. The kit was otherwise the same.

It shares many parts with the older M/30. 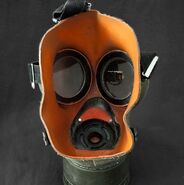 Inside.
Add a photo to this gallery

Retrieved from "https://gasmaskandrespirator.fandom.com/wiki/M/38?oldid=42877"
Community content is available under CC-BY-SA unless otherwise noted.