The M10 was one of many Warsaw Pact clones of the M17 mask, and was issued to Czechoslovakian People's Army and East German's National People’s Army. After Cold War it was replaced in Czech by M90.

The Czechoslovakian M10 is heavily inspired by the US M17, but has many clear differences. The exhale system is different, having a metal housing with the exhale pointing directly outwards. Instead of the M17 style exhale, where the valve is covered by rubber and forced out through the bottom of the housing. The filter openings are larger and threaded. The head harness varies as the M10 head harness is made of a thicker grey elastic fabric with a rubber head pad and large rubber pull tabs. The M17's outserts have been found to fit with M10, but are noticeably smaller, and the filters are not interchangeable between the masks. Due to the different inhale sizes, and cap attachments. The M10 mask was used by both Czechoslovakia and East Germany. And remains in use today by the Czech Republic.

The M10M is an upgraded model which entered production in the late 1980s. Changes encompass the head harness, the voice diaphragm/exhale system. Which was changed to a large grey plastic piece, with a long "M1" style drinking tube wrapped around the assembly with a rubber flap folding over it.

The carrier comes in 3 types; a cloth haversack, a tarp-like dark green bag, and a vinyl bag.

The NVA had multiple hoods made for the M10M, little to no information is known about them and it appears to have been made to copy the M17 style hood. They made a Strichtarn and a rubberized version.

Hoses for the M10 were used to connect to central air ventilation in bunkers. A similar hose was also used with the ZP-10 rebreather.

All parts/components of the ZP-10 rebreather setup 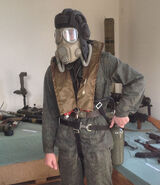 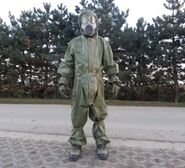 East Germany used both M10 and M10M masks but the M10M was more common. It was used with SBA-1 and SBA-2 chemical suits. After the German reunification the NVA was merged into the Bundeswehr and the soldiers were retrained for the M65. East Germany used 2 different types of hoods with the M10 type masks. These consisted of a controversial Strichtarn hood which is not yet confirmed to be real and the rubber SBK-10 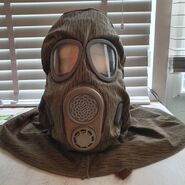 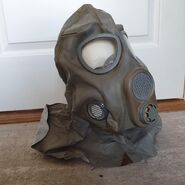 The Czech Republic still used the mask. Mostly for training.

The same as in the Czech Republic.

The M10(M) is very popular among the surplus market, preppers, and collectors of sorts. The mask can be found around the internet for low prices.

The M10M mask was likely popularized by the popular video game DayZ where there is an item called the "Combat Gas Mask", representing an M10M gas mask. 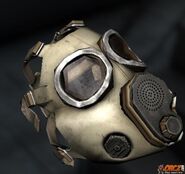 Inside of the M10M

The inhale valves that are placed into the sides of the mask onto the filter. 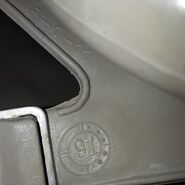 Markings near the bottom right strap.