The M15 gas mask is Israel's current and standard-issue military respirator that has been used for decades by their Defense Forces as well as their law enforcement.

It was designed to withstand an NBC disaster. It takes threaded 40mm NATO filters, each lasting approximately 8 hours upon taking it out of the seal and attaching it to the mask. It includes an integrated speech diaphragm as well as a side voice emitter (in M15-A1T and S-80 models) to talk effectively with a phone and includes a drinking tube attachment to connect a straw, further increasing the comfort. It's fully adjustable with five elastic straps that connect to a head harness and the mask's body and orinasal cup are built from soft rubber. The triangular lenses are made out of impact-resistant plastic and are compatible with prescription lenses using a frame mount assembly. The M15 is based on the German M65 series.

There are 4 different types of models for the military issue M15, all of which are NBC rated:

Filters for the M15[edit | edit source]

The mask is issued with a greenish, tan color STANAG 4155("NATO") compliant canister designated as M80. The filters were originally developed for the IDF to protect against NBC contaminants but also work with civilian masks too. The filter is lightweight and has a shelf life of 15 years.

Head on, with canister

Markings on left of mask 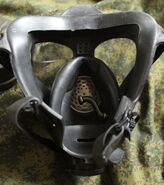 Inside mask
Add a photo to this gallery

Retrieved from "https://gasmaskandrespirator.fandom.com/wiki/M15?oldid=50508"
Community content is available under CC-BY-SA unless otherwise noted.