In the late 1930s and early 1940s, the United States Military saw a need for optical respirators. Most in trial failed but one design saw use the M1 Army Optical series. The M1 optical was very similar to the Navy Diaphragm Series the only difference being the canister being rimmed on the M1, and the M1 having optical lenses, which had a poor field of vision but did the job of fitting with optics. The brow of the lens existed because it was adjustable for optics on certain ranging devices. The M1 optical series then saw use in the Navy as the Navy Diaphragm Optical (NDO). This Optical Design is no longer used today with the growing use of all-purpose masks.

In around the mid-1940s the United States Military replaced the M1 optical series with the M2-10-6 as the M1s were too bulky so they used a design derivated from the current M3-10A1-6. The M2-10-6 was almost identical to the M2-10A1-6 but using an older Diaphragm Angle Tube Assembly Found on the M3A1 Diaphragm. The assembly consisted of an Older M8 exhale valve and plastic Diaphragm Cover. The M2-10-6 and M2-10A1-6s facepiece was made of a neoprene rubber due to the lack of natural rubbers. The facepiece had side running tissot deflectors similar to the ShMS as the ShMS was a copy. The mask was also equipped with a hose and M10A1 Lightweight Canister as well as a 6 point head harness. The Later M2-10A1-6 had an Updated Diaphragm Angle tube assembly using the updated C15 valve.

The Kit of the M2-10A1-6 consisted of a Sprayed Blister Gasses Protective Cover, A M2-10A1-6 gas mask with M10A1 Canister, Anti Dim Cloth, A waterproofing kit, and a M6 carrier.

The M2-10A1-6 is mildly rare today but when found in original packaging is quite rare. However, the M2-10-6 is Quite Rare.

Since The M2-10A1-6 was a lightweight service mask based mask it used the M10A1 filter. However,designation would depend on the canister on said mask. For example, the M2-10-6 may not be the real designation of the older rarer facepiece as the -10- part in the mask means it has an M10 Filter. And the M2-10-6 took both M10 and M10A1 Lightweight Canisters so it also be a M2-10A1-6 and an M2-10A-6 also didn't only be worn with M10A1 Canisters. So it is very easy to misinterpret the designations of those two masks. Another example would be the M3 and M4 masks: M3-10-6 (M10 Canister) and M3-10A1-6 (M10A1 Canister) but each mask is the same with only different canisters but it's different with the M2 Opticals. Other than that, the M10 and M10A1 Canisters were Lightweight, less bulky substitutes to the MIXA1 (M9A1) canisters. Since the mask had no inlet valve the filter had one at the bottom.

The M2-10-6 Army Lightweight Optical Mask. Restored by DukeNougat3d, currently in the hands of a private collector. 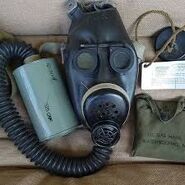 Later Pattern M2-10-6 with Black Diaphragm Angletube. From the Collection of PixelProductions.

The M10A1 Lightweight Service Canister.
Add a photo to this gallery
Retrieved from "https://gasmaskandrespirator.fandom.com/wiki/M2-10A1-6_Lightweight_Optical_Gas_Mask?oldid=43135"
Community content is available under CC-BY-SA unless otherwise noted.