The M2000 is the standard military issue gas mask in Germany's army, where it replaced the M65 gas mask series.

The mask comes in three sizes; 1, 2, and 3 which correspond to small, medium and large, respectively.

Due to common misconceptions, most assume that the M2000 was made by the German company, Dräger. However, Dräger paid Mine Safety Appliances (MSA) almost 9.3 million dollars to design and create over 50,000 M2000 masks. Dräger is now currently taking MSA's footsteps, and is now producing more M2000 masks.

The facepiece is made of flexible green butyl rubber. This facepiece is extremely soft and comfortable on the face, much higher quality than the M65 masks.

The voicemitter/exhale valve cover is made of a thick plastic material. Voicemitter is seen above the filter, and the exhale valve is seen on the bottom of the facepiece. Voicemitter projects the user’s voice better than most masks out there, but far from the best.

The M2000’s filter capabilities make this mask stand out the most in the current-gen military respirators. The mask takes both standard 40mm filters and the F2000 speciality filters, produced by Dräger. The F2000 filters don’t feature any threading, rather they are inserted into the input with a locking mechanism. Along with the locking feature, the F2000 also has the ability to “swivel” left and right allowing it to adapt to left or right-handed shooters. This eliminated the use of interchangeable filter ports and secondary voicemitters.

The M2000 features a 6-point fabric head harness with a head pad. The temple and forehead straps can be locked into place, so the user can pre-adjust the mask before donning, leaving only the bottom two straps left to adjust. The head harness is extremely comfortable and is very easy to adjust.

The inside of the mask features a very common aspect of most masks today; an inner peripheral seal and an oralnasal cup. The oralnasal cup inside of the M2000 is not the same color as the facepiece, rather it is a cloudy, clear/white-colored rubber.

The haversack is a large tote-like bag, with a flecktarn camouflage pattern on the outside. The haversack features a rubber strap and peg to close and open the bag. The haversack also features a detachable shoulder strap. The inside is made of waterproof-like material and is extremely spacious, which means you could fit the mask and all of its accessories inside this bag.

The M2000 kits came with two pairs of outserts, neutral tint, and laser outserts. The laser outserts are usually a lot harder to find, as they are not always standard with every kit. The outserts come in a small green case, which was made to prevent scratching and damage. Rather than a rubber ring around the outsert to place over the eye lenses, the M2000 outserts feature special grooves that allow the outserts to click and lock onto the eye lenses itself. Removal is just as easy as installing them.

The M2000 also comes with a decontamination/first aid kit. The contents include chemical burn ointment, chemical paper, earplugs, gauze pads, and a cleaning cloth. All these contents are contained inside of a foldable plastic pouch.

The drinking tube is not attached to the mask, but rather it is inserted inside of the drinking stem.

Inside of the mask 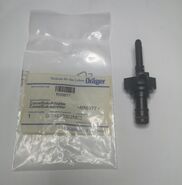