The United States M3 Lightweight Service Mask was a needed upgrade for the US military after it was found that the weight and bulk of the older M2 series service masks were unsatisfactory. The M2 series service mask had a longer 27-inch hose, no oronasal cup, used the MIXA1 canister, used the MIVA1 "Kidney" Carrier Bag, and had a rifle skid on the lower head harness of the facepiece which was positioned on the mid-cheek of the facepiece. The M3 Lightweight service mask had a shorter 18-inch long M3 hose, addition of an oronasal cup, the lighter weight M10 or M10A1 canister, a smaller M6 carrier, and the facepiece itself had the head harness tab position changed to be farther back on the facepiece which negated the need for a rifle skid.

The requirement for the M3 Lightweight Service mask was established as early as January of 1942 but wasn't finalized or standardized until later that year. Early production of the M3 saw problems with the canister assembly, the crimping of the eye-rings to the facepiece, and problems producing the M6 carrier which was the main bottleneck of the lightweight service mask. As a stopgap, while the M3's production kinks were being worked out, the M4 lightweight service mask was finalized in late 42 where they took reconditioned M2A2 facepieces and converted them into a Lightweight service masks configuration, but still didn't see any major production until late 44. It wasn't until May of 1943 that the M3 Lightweight Service Mask had worked out most of its problems and saw full-scale production by its major contractors. By August of 1943, the M3 replaced all older service masks on the production lines. Another issue of the M3 facepiece was the installation of the nose cup within the mask which had to be carefully vulcanized in place. Firestone developed a machine that vulcanized the nose cup to the facepiece automatically, which further sped up production. Initial procurements of the M3 face piece were molded from grey natural rubber, but as a result of the military's dwindling rubber supplies caused by the loss of the pacific islands. Even though the CWS had taken measures to save on natural rubber by reducing the amount of latex in the rubber mixtures and then authorizing the use of reclaimed rubber, in late 1943 the production of M3's switched to using neoprene rubber exclusively.

The M3 series was manufactured by several companies such as Dryden Rubber Company, Firestone, Acushnet Processing Company, Goodyear, General, and BF Goodrich, which resulted in a variety of different shaped and styled moldings of face blanks and rubber mixtures. The variation in facepiece molds made it possible for the Universal size to fit just about anyone, but the M3 Lightweight service mask was also made in size super small and size large which are really hard to find examples of. Other hardware such as the M8 valve or head harness tabs had variations as well, resulting in slight differences such as color or style. The eye-rings are often grey on earlier procurements but were later changed to black. The hose of the lightweight mask had several variations as well, along with the procured natural rubber or synthetic rubber M3 hoses, some 18-inch hoses were recycled 27-inch long MII hoses which had 9 inches cut off of it. The leftover 9-inch pieces taken from MII hoses could then be vulcanized together to create an 18-inch long hose. As a result, two MII hoses could be made into three 18-inch long M3 hoses.

The M10 canister, which resulted out of a necessity for replacing the heavier MIXA1 canister on the service masks, was used on early procurements of the M3 and M4 Army Lightweight service mask as well as some examples of the earlier M2 optical mask. The M10 was smaller and lighter but just as effective as the MIXA1 canister because of superior filtering components but didn't last as long. The MIXA1 and M10 canister were both radial flow canisters, which means air flowed in from the bottom and was directed into the outer layer of the mechanical filter which lined the outer shell of the canister, and then directed into the internal charcoal canister, and finally into the inner tube which is often lined with felt, into the hose and of course through the mask into the lungs. The MIXA1 canister had 10 plies of carbon-impregnated paper wrapped around an internal canister filled with either Type A charcoal (copper impregnated charcoal) or Type AS charcoal (copper-silver impregnated charcoal). The internal components featured upgraded filter ingredients, such as an asbestos bearing paper for the mechanical filter wrapped around an internal canister of Type AS charcoal. In mid-1943, the improved Type ASC charcoal (copper-silver-chromium impregnated charcoal) replaced the older Type AS charcoal in the M10. Then, in late 1943, the M10A1 canister was introduced as an upgrade to the M10 canister. The main difference between the M10 and M10A1 was the M10 had a volume of 275 mL for the internal charcoal canister, whereas, the M10A1 increased that size to 340 mL for charcoal, thereby making it more effective than the M10. The M10 canisters saw use from late 1942 all the way up until it's obsoletion date in 1949, as a result, all Army lightweight service masks in use after 1949 exclusively used the M10A1 canister. Of course, M3's or M4's with an M10 canister would be designated M3-10-6 or M4-10-6 Army Lightweight Service Mask, and with the M10A1 the designation changed to M3-10A1-6 or M4-10A1-6.

The basic kit for the Lightweight Service Mask consisted of the mask, M6 carrier, C3 waterproofing kit, two individual protective covers, a set of M1 Eyeshields, an anti-dim cloth, and either an M4 or M5 ointment kit. Earlier kits would have two early contract cellophane packed individual protective covers and an M4 ointment kit with BAL eye ointment with the rest of the kit. Later kits were given the cloth-covered tinfoil packed individual protective covers and the M5 ointment kit which was introduced around 1944. The M6 carrier has 3 internal pockets, assuming the front face of the carrier is facing you, a sealed protective cover was stored in the left-most pocket and an opened protective cover went in the middle pocket while the third rightmost pocket housed the M4 or M5 ointment kit. The eyeshields were to be placed against the pockets on the inside of the carrier under the mask. The canister went through the two loops inside of the carrier with the inlet facing the right side of the carrier. In order to properly place the mask into the carrier, the canister was flipped with the hose running along the bottom and the inlet of the canister now facing the left of the carrier, the head harness was folded into the mask and the canister was placed into the facepiece with the chin of the mask seating over the inlet valve. The carrier was then closed. The carrier could be worn on the left side of the body at the standard carry or to the front and back. If there was a threat of a chemical attack, the hook that is present on the shoulder carrying strap would be fastened to the D-ring which would bring the carrier chest height without needing to adjust the shoulder strap. The mask could then be donned and worn effectively. Early M6 carriers were dyed OD3 which was a khaki color and then later war examples will be dyed with an OD7 shade of Olive Drab. Post-war carriers were dyed with OG107 which is slightly different from OD7.

The M3 was also famous for being modified into the E6-3-7 Assault Mask and the standardized M5-11-7 Combat Service Mask by taking an unissued M3-10A1-6 facepiece, cutting off the hose, plugging the hole where the hose was, and modifying the side of the facepiece to have 60mm threads for the M11 Drum Filter, but because of high rejection rates did not see much production after it's standardization and the ultimate cancellation of the project.

Later iterations of the M3 and M4 were the M3A1-10A1-6 and M4A1-10A1-6 and have no difference to their regular counterparts except for the addition of the C15 outlet valve, most known for being on the M9, and was much better protecting the valve from debris as well as having better winterization properties over the M8. No M3A1 or M4A1 masks were original produced, all existing examples are retrofits from older M3's and M4's where they simply replaced the older M8 exhale valve with a C15. M3A1's and M4A1's will commonly be found with the white post-war C15 outlet valve cover, but possible "wartime" examples do exist with the earlier black valve cover that lacks a pull tab. The M3 Lightweight service mask and other Lightweight masks were issued as a standard service mask alongside the M9 and M9A1 field protective mask well into the late 1950s. Officially, the Lightweight series were obsoleted on August 18, 1961. 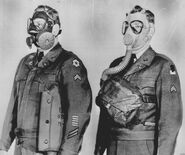 An example of an M3-10A1-6 Lightweight Service Mask with a neoprene rubber facepiece.

An M3-10A1-6 Lightweight Service Mask with a neoprene facepiece. Note how the M8 Outlet Valve has a black plastic cover instead of the usual grey cover, this was a result of having several companies manufacture various parts for gas masks at the time.

An example of an M3-10A1-6 with a rarer Class B Rubber Facepiece instead of the usual black neoprene. 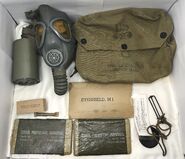 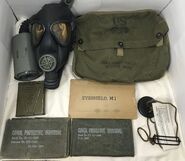 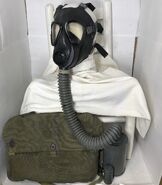 Closer look at the black M8 valve, notice how the dye is inconsistent throughout the plastic itself.

A U.S. Soldier aiming a "Bazooka" Rocket Launcher while wearing the Class B Rubber version of the M3-10A1-6 Lightweight Service Mask.

Enlisted Men of the 442nd Infantry Regiment (composed of mainly Japanese-Americans) exiting a gas chamber with black neoprene M3-10A1-6 Lightweight Service Masks.
Add a photo to this gallery
Retrieved from "https://gasmaskandrespirator.fandom.com/wiki/M3-10A1-6_Lightweight_Service_Mask?oldid=41830"
Community content is available under CC-BY-SA unless otherwise noted.