The M3-77 is a Spanish military gas mask used from 1977 until the adoption of the M6-87. However, the M3-77s were never fully phased out by the Spanish Military and can still be seen on some CBRN drills as late as 2015.

The M3-77 uses a facepiece based on the M65, with various notable differences, mostly the M59-styled voice diaphragm. The colour of the mask may very from green with red furniture to grey/black with white furniture.

The difference between the M2-73 and M3-77 is in the facepeice. The M3-77 has had the rubber base to which the front strap tab is attached made a little wider than its predecessor, to allow for a better face seal. All other parts are identical and are interchangable. 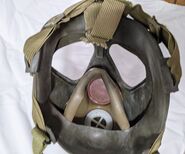 The M3-77 kit consists of the Mask, the carrier, the filter and a packet of lense wipes.