Pfc. Holly Horned adjusts her M40 during an exercise

The M40 series Field Protective Masks were used by the US Army, US Marine Corps, and selectively by the US Navy. [2]. The masks were developed and introduced as a replacement to the M17 series protective mask that had been in service since 1959.

The M17 introduced a number of innovative features absent on the previous service masks, such as a voice diaphragm and a drinking system. However, the M17 series had a number of shortcomings:

In the 1970s the Army experimented with two new masks, the XM29 and XM30 series. These masks, however, had several problems with the panoramic eyepiece as well as the fact that the silicone rubber it was made of was vulnerable to persistent chemical warfare agents, which diffused into the silicone and eventually exposed the wearer to that agent. The Navy and Air Force decided to develop the design further and finalized it as the MCU-2/P.

Learning from their mistakes, the Army decided to start over. In 1984, the ILC Dover company came out with the first prototype of the mask - the XM40. It was a very loose design, but it helped pave the way towards the development of the M40. The initial prototype was heavily influenced by the M17A1/M17A2 masks and featured a dimple under the voice diaphragm for clearing the mask, a feature dropped in later prototypes.

Later, another XM40 prototype was designed. It was similar to the first but more rigid. There were complaints about bulk, and so the mask was developed further.

Around the late 1980s, the XM40 was finalized as the M40 Field Protective Mask, but it did not enter service until after the Gulf War (in which the M17A2 was mainly used). It was mass-produced and mainstay issued from 1992 onwards. 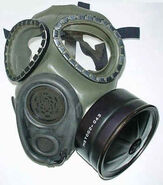 It had two large, polygonal, binocular sight plexiglass eyepieces, which came with a separate pair of ballistic lens "outserts", like its cousin, the M17, but these outserts also came in a neutral grey (tinted) version for protection against UV rays and flashbang grenades. It had a large voice diaphragm (same as on the MCU-2/P Series) which had threads on the inside to fit an M7 or MSA Voice Amplification Unit. The outlet valve had a drinking tube built into it, which wrapped around the outlet valve cover and fit in a pocket on the cover (again, similar to the MCU Series).

Inside, the mask has an inverted peripheral seal, and the chin cup has a slit to allow sweat to pass down to the exhale valve. The oronasal cup is the same type as on the MCU-2/P. It used a 40mm threaded C2 canister which could be switched out on either side with a secondary side voice diaphragm (used for telephone communication) to accommodate left and right-handed rifle users.

The facepiece is made of olive-colored silicone rubber, as in the XM40 Series. To provide protection from persistent chemical warfare agents, the mask was issued with a special hood made of butyl rubber-coated nylon and had a specially made sheet of butyl rubber, sewn into the hood, that covered the facepiece, protecting the silicone facepiece from the harmful effects of persistent chemical warfare agents. The butyl rubber "second skin" fastened to the facepiece with hook and pile fasteners near the bottom of the exhale valve, where a part of the hood curled under that had the patches to fasten on.

In the mid-1990s, the M40 was updated and re-designated the M40A1. It had a new orinasal cup design made of a smoother silicone rubber. The hood and second skin were redesigned as well. The second skin was now a separate piece of molded butyl rubber, that once put on the mask, was meant to stay there (aside from cleaning or replacing when broken).

This new second skin did not cover the parts of the mask where the head harness buckles were attached, and had an up-raised peak of rubber, similar to the British S10 Facepiece, all around the edge of the skin. This was meant to help hold the new M40A1/M42A1 "Quick Doff" Chemical

Hood in place and prevent it from slipping off the mask. On the top and bottom of the skin, and on top of the hood peak, there were rubber tabs (one on top, near the forehead, one on the bottom, near chin), which were intended to further hold the hood in place.

The mask also was issued with a new type of canister - the C2A1. The C2A1 used an improved, zinc based sorbent that defeated blood agent challenges. This replaced the hexavalent chromium based sorbent of the old C2 canisters making the filters safer for the wearer and for disposal. The filter variants can be identified visually; the C2 canister filters were painted black while the C2A1canister filters were painted green. The old C2 was still used during the phased out and was eventually designated only for use in training with CS and other mask confidence challenges.

Later in the late 1990s, the M40A1 second skin was updated. The Army discontinued the S10-style hood stop system and left a small ridge-like hood stop on the chin. The second skin was slightly thinner and it covered more of the mask surface area including a neck flap.

Aside from the second skin, everything else remained

MSA and Scott Aviation and ILC Dover (who helped the early development and production of the M40), sold the M40 contract to the adhesive company, 3M. 3M began producing the M40 as the FR-M40, intended for civilian use and marked (NOT GOVERNMENT PROPERTY). Aside from this marking, the mask is identical to the M40A1. It should also be noted that it is possible that 3M reused older molds to produce the FR-M40 as some examples out there sport both the standard '3M FR-M40) stamp as well as manufacture roundels denoting it as produced by ILC Dover.

The M50 Joint Service General Purpose Mask started replacing the M40 Series and the MCU-2/P in 2008.

These were made to protect the actual lenses themselves from damage.

Issued with the M40A1 as a replacement for the older first generation M40/M42 Hood which had the second skin sewn that was prone to leaks. The "quick doff" hood is a simple chemical resistant hood, made of nylon fabric rubberized with butyl rubber with a large, circular, elastic opening for the mask. The hood had two underarm straps made of the same material as the hood with metal adjustment buckles in the back and black plastic fastening clips in the front. The neck area has a built-in elastic band in place of the old drawstring cord and slider. The hood is very easy to use and could be used with a variety of U.S. or international gas masks.

A special pair of corrective lenses that have special frames that fit around the inside of the mask eye lenses. There are two varieties; a plastic frame type and a metal wire frame type.

Standard in most U.S. protective masks from the Vietnam War and onwards. The M1 waterproofing bag is a large vinyl plastic bag used to keep the mask dry when fording rivers and streams, or whenever the mask may be exposed to water. The bag can degrade the protective qualities of the mask and can have toxic effects when the bag contacts foodstuffs. The bag comes with a cardboard sleeve of rubber bands meant to close the bag. The bag is stored folded in a  re-sealable zipper storage bag in one of the internal or possibly external pockets of the mask's carrier.

Laminated flashcards on a metal ring that list problems and defects you need to check for on a certain basis for the M40 Series Field Protective Masks.

The M42 is the armored crew member's version of the M40 Field Protective Mask. It had a voice diaphragm with a built-in microphone for the tank's radio and communications system. The kit also contained a long green hose fixed to the facepiece on the M42, then a threaded black hose to switch sides for left and right handed tankers on the M42A1 and M42A2. The C2 or C2A1 filter on the end of the hose had a special plastic casing; olive drab green plastic with a metal coupling on the M42, and a black plastic case with a black plastic coupling on the M42A1 and M42A2. This casing had a special coupling on the inlet port so that a hose from the tank's supplied air system could be attached to it. Every other aspect of the M42 series masks besides the hose, microphone, filter casing, and coupling are the same was their M40 counterparts. The M40A1 could be issued with a special conversion kit to field modify the mask into an M42A2 armored crew member's mask due to the excessive cost of making separate masks for different purposes. The kit came with the hose, casing with coupling and carrying straps, and a special clip-on microphone that clips to the main voice diaphragm.

The M40 series has had its own Toxicological Agent Protective (TAP) Hood meant for heavy decontamination, chemical stockpile inspection/handling, and other tasks. TAP hoods for the M40 are very rare and expensive due to their scarcity. Few photos exist of the M40 TAP hood and information is rare. The actual designation for the hood is unknown.

There also exists an early model designated XM3A1, it is vastly different in design compared to TAP hoods seen on the M9A1 and later M40 variants. This version lacked filter sleeves, leaving the voice diaphragm and exhale valve exposed. This variant has what appears to be a type of second skin made from what is possibly an off-white nylon coated butyl rubber. Possible design flaws of this variant were what have made the final variants for the M40 retain the filter sleeves and full enclosure to seal and partially overpressurize the TAP hood via positive pressure.

The M3 is a Serbian copy of the M40. It's remarkably similar however the voice diaphragm, filter, outlet valve and the size of the eyepieces (same shape as the M40) are slightly bigger than the M40. The drinking tube on the M3 is also very similar to the drinking tube used on the Canadian C4, because of the way it attaches under the left eyepiece and curls behind and under the filter inlet.

While these masks are the same as the M40A1, the key difference is the second skin which is made of a tan butyl rubber instead of the basic black. This is similar in design to the second skin sewn on the first generation chemical hood, but without the hood. There is another version that is a direct copy of the M40A1's second skin made of a tan rubber in use with the UAE military. 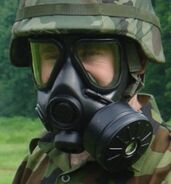 UAE soldiers with their M40A1's fitted with the tan second skin during a drill.
Add a photo to this gallery

The M40 Series was not only used by the Army and Marine Corps, but it's also widely documented photographically that the U.S. Navy (especially the Naval Construction Engineers) adopted the M40 as well as either a replacement or a partner mask to the MCU-2/P chemical protective mask.

The Explosive Ordnance Disposal Mobile Unit 11 Team also adopted the mask but used a special blower (PAPR) that had two C2 or C2A1 filter screwed on the front. The blower was worn on the belt or on the back and had an electric fan that sucked air through the filters and forced air through a long tube into the mask. The blower units are very rare and are not usually found on the secondary market.

Retrieved from "https://gasmaskandrespirator.fandom.com/wiki/M40?oldid=33481"
Community content is available under CC-BY-SA unless otherwise noted.