Since the late 1920s, one of the ultimate goals of the American Chemical Warfare Service was the procurement of a specialized mask which reduced the overall weight and size to a convenient package without sacrificing protective quality. Most of these concepts varied from novel at best to bizarre and impractical at worst, because, at the time, it seemed inconceivable for the American Chemical Warfare Service to develop a mask whose canister was mounted directly to the side of the facepiece without causing leaks. The U.S. had dabbled with masks that had canisters mounted in the chin position, but did not hold them to high regard given the inconveniences noticed wearing the mask while lying prone or crawling. In 1942, the British had finalized what would become the Light Anti-Gas Respirator Mk.I, which took the profile of the General Service Respirator Mk.V, but successfully mounted a small 60mm-threaded replaceable drum canister on the side of the facepiece.

Taking note of this, the CWS established a research division at the Massachusetts Institute of Technology (MIT) in 1942 to develop a mask based off this pattern while utilizing the then-standard M2, M3, and M4 Service Mask Faceblanks. Many unique concepts came of MIT's experiments in effort to develop an American side-canister mask, but ultimately one would go on to be developed and adopted as the E6-3-7 Army Assault Gas Mask in 1943, filling the gap for a compact, lightweight mask to be used by amphibious landing teams and paratroopers alike during the upcoming Operation Overlord.

Initial MIT concepts for a lightweight "assault" mask with a side-mounted canister ranged from the creative to the bizarre. By June 23, 1943, the bulk of the experimentation was nearing a conclusion and the final pattern for the defining features of an 'assault' mask were realized. These principles involved a side-mounted canister that integrated with the existing deflector channels of a standard service mask facepiece, the canister being 60mm threaded and replaceable, and the carrier being waterproof and convenient to carry.

The concept which would go on to be developed further was known as the E4R3-E1R6-E1R3 - the E4R3 facepiece design took a standard Class 'B' Gray M3 Service Mask Faceblank, removed the hose stem, a 2" slot cut in the left deflector channel from the outside, and a blanking plug and canister port were re-vulcanized onto the existing faceblank, allowing for the 60mm E1R6 Canister to thread into the side of the mask and the incoming air channeled into the usual deflector tubes without entering from the bottom. The E1R3 Carrier was made of waterproof, cotton duck canvas, coated on both sides with butyl rubber, whose opening flap was rolled uprightly and closed with 4 ball-and-socket type 'DOT' button fasteners along the exterior.

The MIT E4R3-E1R6-E1R3 was given a limited procurement contract of 250,000 specimens on October 15, 1943, where 1,282 masks were delivered in December of that year. On January 21, 1944, the E3R4 was re-designated the E6-3-7 and continued testing until April of 1944. The E7 Carrier differed little from its prototypical counterpart, and sometime after January 1944, it was recommended that the 4 DOT button fasteners be replaced with 3 'Lift-The-Dot' fasteners, and the carrier be widened by 1/2" width-wise, and 1½" length-wise, resulting in the E7R1 Carrier.

Additionally, the normal M7 Head Harness was found to insufficiently support the E3 Canister while in use, and so the introduction of a canister-supporting nape strap resulted in the C4 Head Harness, and this plus the introduction of slightly smaller faceblank resulted in the E6R1 Facepiece. Despite the presence of the upgraded M7 (E7R1) Carrier being procured by Spring of 1944, and the recommendation to finalize the E6R1-3-E7R1 as the M5-11-7 on May 26, 1944, the plan was set back as the large-scale procurement of 398,462 E6-3-7 Assault Masks was set into production after February 1944, with enough available to go into action during the invasion of Normandy, June 1944.

The E6-3-7 initially issued E6R1 Masks utilizing Class 'B' Gray Natural Rubber M3 Faceblanks, however existing stocks of these Gray Rubber M3 Faceblanks were diminishing due to Japanese control over the Pacific cutting the U.S. off from natural rubber, and the procurement of M3-10A1-6 Lightweight Service Masks made of black government rubber neoprene (artificial rubber) after May of 1943 allowed the E6 Mask to be produced of said neoprene M3 Faceblanks. The neoprene E6R1 Facepiece (still referred to as E6 during issue) would fill the bulk of the E6-3-7 Assault Masks issued during the Normandy beach landings and used well into Holland while the E6R1-E3-E7R1 was waiting to be finalized as the M5-11-7 Combat Service Mask.

The E6-3-7 was also issued with an E3 Canister (British Light Anti-Gas Canisters were also authorized in case of short supply), which is identified by the manufacturer marking 'CROWN' or 'C' embossed into the steel body in addition to the 'E3' designation stamp, an E4R2 Mud Guard that prevented debris from clogging the canister inlet, and of course the waterproof E7 Assault Mask Carrier, which would be marked in yellow with the typical US and CWS Logo Markings, followed by U (Universal Size) or UL (Universal Size, Left Canister Stem) and 'Army Assault Gas Mask'. Although there were plans to produce a variation of the E6R1 Mask with a canister stem on the right side of the mask for left-handed shooters (hence the 'UL' Marking on some E7 Carriers), these plans were scrapped as it was realized how difficult it was to produce the E6R1 Mask, and high rejection rates owing to the production priority on the left canister stem model.

On June 7, 1944, the E6-3-7 Assault Gas Mask was standardized as the M5-11-7 Combat Service Mask. The new, larger M7 (E7R1) Carrier, which replaced the 4 DOT Fasteners with 3 Lift-The-Dots began to overtake and replace the earlier E7 Carrier, as did the M11 Combat Canister begin to overtake the E3. However, production of the M5-11-7 Combat Service Mask was halted shortly after due to complications in producing the neoprene faceblanks, in addition to MIT beginning development on a new assault-style gas mask, the E19R25-M11-E19R2.

On top of poor production rates, an Army field test report from January 18, 1944, had discovered that when neoprene E6-3-7 Masks were kept stored and carried in -20°F (-28°C) temperatures for over 20 hours, the rubber would take a permanent set and become so stiff, that it would not properly seal against the user's face should the mask be needed until it was warmed up for at least a minute against the user's body. Additionally, masks that were removed and stored in their carriers after 30 minutes of wear time in -10°F (-23°C ) temperatures were found to have frozen condensate on the M8 Outlet Valves that would make exhaling impossible until enough exhaled breath contacted the valve to make it supple again. This phenomenon of cold-climate stiffening was subsequently referred to as 'cold-set'.

By June 8th of 1944, the Office of Chief Chemical Warfare Officer, Headquarters European Theater of Operations USA began to forward complaints of black neoprene Lightweight and Combat Service Masks experiencing cold-set colder regions of the ETO. By Fall of 1944, the Army then issued an executive order to divert all neoprene masks produced from that point onward to the Pacific Theater of Operations and have all masks made of Class 'B' Grey natural rubber sent to the ETO. On top of this, all available 400,000 remaining M2 Service Masks in the ETO were slated to be converted into M4 Lightweight Service Masks.

Despite this, high rates of rejection on the production line combined with the mask's limited specialty role lead the M5-11-7 Combat Service Mask to cease production in late 1944, owing to 500,000 total E6-3-7 and M5-11-7 Masks produced during the war. The M5 combat Service Mask continued to be experimented with and scantly issued to primarily Airborne units, and continued random issuing as a standard-issue or more commonly as a training mask after WW2 until it was obsoleted entirely from service in 1958 in favor of the M9 Series Field Protective Masks. The M5 mask continued to be utilized by civilians and at the Hanford Plutonium Finishing Plant for a short while into the 1960s, but no official military usage was made of the mask after 1958.

The standard packaged accessories for the E6/M5 Masks consist of:

Worthy of specific note all on its own is the special rubberized carrier utilized with the E6/M5 Masks. Due to the hermetically watertight construction of the rolled closure flap, the carriers have been reported to double as an impromptu flotation device, credited with saving lives of men dropped into deep water during Operation Overlord. There were many ways the carrier could be worn on the body, including, but not limited to:

Many variations, reproductions, and fakes of these carriers also exist and there are ways of determining each one.

Reproductions will generally be made of a lower-quality, more plastic-looking rubberized material with garishly bright hunter green or neon yellow stamps. Additionally, these poorer-quality reproductions will typically have paper-thin nylon webbing as the straps and incorrect buckle hardware/sewing patterns. Better quality reproductions will use more convincing rubberized fabric material, but can still be told apart from most originals from the heavy braid pattern of the fabric visible under the rubber coating, looking much like tarp fabric to a degree. Additionally, the markings will still be blatantly bright yellow with inaccuracies in the style of the CWS Logo Stencil. Most of the newer good-quality reproductions will also have OG-103 "Khaki" webbing straps, which was a feature on some early E7 Carriers, but a majority do not and finding originals like this is a rarity.

The E6-3-7 Assault Mask is undoubtedly one of the most historically significant masks of the Second World War, although the carrier seems to be more famous than the complete mask itself, as the appearance of wearing the black, rubberized E7 Carrier on the chest of an American GI is one of many iconic symbols of the Normandy Invasion. The E6-3-7 has appeared in many movies, video games, and war documentaries centered around the Omaha Beach Landing, perhaps the most famous being Saving Private Ryan (1998). Due to the mask's historical provenance and its appearance in popular media, it is one of the most valued and sought-after gas masks of the WW2 period, with prices of complete sets ranging between $200-700 on average, depending on the condition and completeness.

The E6 As Worn. The canister pictured is not a normal E3/M11 Combat Canister, but an MIT-E10R2 Smoke Canister.

A Modified M5-11-7 Combat Service Mask with Lens Frames off a Willson G-2 Mask and an M14 Aerosol Filter in use at The Hanford Finishing Plant. 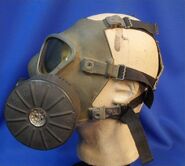 Much of the Same. Notice the Later M11 Combat Canister. 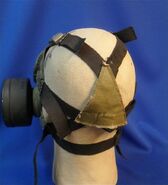 The E7 Carrier. It is uncertain whether it lacks any markings or if they have simply worn away.

Mask in the E7 Carrier.

An expired listing photo for the Class 'B' Gray E6 Assault Mask.

Much of the Same.

View of the Canister Stem, of which the Threaded Inlet Valve Assembly is of Canadian origin.

The presence of an M7 Head Harness instead of the later C4 confirms this as an E4R3 Facepiece.

Production Stamps. Facepiece mady by the Acushnet Processing Co. on May 1943.

Reverse side of a typical E7 Assault Carrier.

An E6-3-7 Facepiece from the Collection of DukeNougat3d.

An E6-3-7 Facepiece after disassembly, prior to restoration. From the Collection of DukeNougat3d.

An E6-3-7 Facepiece, Post-Restoration, still in need of a new C4 Head Harness. From the Collection of DukeNougat3d.

M5-11-7 Combat Service Mask Kit, from the Collection of DukeNougat3d.

A profile comparison between the M5 (Left) and E19R49 (M9) (Right) Combat Service Masks. From the Collections of DukeNougat3d and RetroRespirators.

Side view, revealing canister stems and deflector paths. Note the harness webbing is not present due to ongoing restoration. From the Collections of DukeNougat3d and RetroRespirators.

A typical, unissued E6-3-7.
Add a photo to this gallery

Retrieved from "https://gasmaskandrespirator.fandom.com/wiki/M5-11-7_Combat_Service_Mask?oldid=34595"
Community content is available under CC-BY-SA unless otherwise noted.