The MC-1 is a polish copy of the Czech CM-3. It was destined for Polish Army and Civil Defense, but adopted only by the second formation and used till the end of Cold War.

It was made from olive-tan rubber. The original CM-3 has the inlet/exit valve out of brown bakelite. Whereas the MC-1 has a black plastic inlet/exit valve assembly and an olive green fabric 6 point headstrap. The eyepieces are glass, held on with crimped metal and fabric. Air enters the mask via Tissot tubes and exits through the exit valve/voice diaphragm. The voice diaphragm contains a metal mesh (similar to a wire kitchen sifter) covering it, it also has a thin plastic disc behind the metal mesh. The plastic disc is thin and slightly translucent, which becomes obvious when a flashlight is put behind the voice diaphragm. The mask is relatively light and is a simple design. The filter that comes with the mask was a light grey GOST canister known as the MS-4. It spread in the surplus market after the end of the Cold War when CD's warehouses were closed down and their assortment sold out.

Comes with two paint variants: Light green and Camo wz. 68 "Mora". Meant to be carried on shoulder belt but thanks to unnoticeable weight can lay only on chest belt. Bag consists of one bag for gas mask and filter and outside pouch for a field patch. 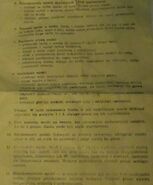 MC-1 instruction (back)
Add a photo to this gallery
Retrieved from "https://gasmaskandrespirator.fandom.com/wiki/MC-1?oldid=39617"
Community content is available under CC-BY-SA unless otherwise noted.