Close up of a MII Diaphragm facepiece

In the late 1920s, the US was looking to improve and develop upon the MI diaphragm gas mask. The Army began experimenting with new types of diaphragm face pieces. One of the first was the E3R64. The suitability of this mask for use by the Infantry and wherein it excels previous masks needed to be determined, therefore a completed report on testing was submitted 18 December, 1928. Fifteen of the masks were received for testing. During its testing, the E3R64 was compared with a 1-2-2 service mask. The 3-3-2 experimental diaphragm mask was not present during the trials. Test officers who had had previous experience with the 3-3-2 could compare from memory.

Some sixty men wore the masks at different times. Both masks were worn during drill, sighting and aiming exercises and while firing service ammunition. During several one-hour periods, they were worn alternately for 15 minutes with the 1-2-2 mask. The wearers were all observed by officers and one group of fifteen riflemen.

This mask does not bear against the noses of a very large proportion of wearers. Nearly all of the wearers during the test would rather wear the new mask than the old one because they could see better and breathe easier. The face piece did not press anywhere except on the forehead. The eye piece did not dim so easily and the drainage was better.

Upon firing all firers could assume exactly or very nearly their individual normal firing positions without strain.

Although many men could be understood while speaking with the mask on, a certain number could not. A suitable compromise has not been reached between voice transmission, diaphragm material and thickness. In general, the masks did not leak. One maks leaked when well fitted on two different men. There was probably some defect in that one mask. The three-strap head harness was unsatisfactory to many wearers. The straps seemed to be too short for adjustment on many of the masks. The experimental mask face piece seems to require a more nearly perfect fit. It is difficult to determine this with only 15 masks.

After the testing of the E3R64 testing continued with the E3 experimental diaphragm series.

The initial test on the E3R111 using fifty men divided into six groups was to determine the time required for fitting and inspecting each type of mask. The time recorded included the time from the command to put on masks until the officer in charge had passed them as fitted and adjusted satisfactorily. Test #2 was to determine the number of cases, if any, which can be more satisfactorily fitted with the diaphragm Face piece E3RIII than with the regulation Facepiece MIA1. The results showed one man with a small face and receding chin could not be properly fitted with either type of facepiece. One other man with a long narrow jaw and pointed chin could not be fitted properly with the E3R111 facepiece but was fitted properly with the regulation MIA1 facepiece. All other men were properly fitted with both. Test #3 was to determine comparative comfort of the two types of facepieces. The results showed 40/50 men thought the E3RIII facepiece more comfortable, 10/50 thought the MIA1 facepiece more comfortable. Test #4 was to determine the opinions of the men as to vision with relation to seeing the ball in a ball game. The majority of the men thought they had better all-around vision with the new mask.

A discussion of the neck of the angle tube of the mask being tested appeared to be too short and the flange around the lower end too small. The angle tube does not extend int the corrugated tube a sufficient length to insure a durable and gas-tight coupling. One mask came apart at this coupling during the test, while others showed weakness at this point. Two of the facepieces developed gas leaks around the diaphragm during the test. The leaks seemed to be at or near the point where the flutter valve enters the mask. The cause of the leaks appeared to be poor construction and workmanship rather than faulty design. Despite these disadvantages the Facepiece

E3R111 proved to be superior to the regular Facepiece MIA1. The universal one size feature materially simplifies the supply problem within the Infantry organization. It also greatly facilitates the fitting and adjusting of masks. These advantages outweigh the disadvantages noted. Correction of the defects would greatly improve the mask.

In March of 1934, the CWS introduced a new experimental diaphragm mask, the E3R135. It was compared to the E3R111 diaphragm gas mask. The two facepieces under test are designed as universal types made in one size, intended to fit all size and shapes of faces. They are designed to allow communication by voice.

The E3R111 is an improvement over one of the same designation that was tested by the Department of Experiment Infantry School Test 643, dated January 23, 1933.

The facepiece E3R135 is a new type designed as an improvement over Type E3R111 in a number of particulars, the most important of which are cit3ed as increased comfort and better sound properties.

The initial test was to determine clearness of enunciating while wearing the masks. Both masks were worn by a machine gun platoon commander while drilling his platoon in close order drill and delivering fire orders. The execution of the commands was somewhat better with the E3RIII than with the E3R135, the difference increasing with the distance at which the commands were given. At a distance greater than 40 feet the commands became indistinct with both masks. Test #2 was to determine degree of impairment of vision and adequacy of field of vision. Four officers wore both face pieces under different circumstances. Results showed no difference when using field glasses, in using the aiming circle, in the use of marching compass and lensatic compass, and no difficulty in the correct laying of machine guns. Use of the range finder was very difficult due to the distances separating the eye from the eye piece. Test #3 was to determine if vibration noises on exhalation exist to an objectionable degree. This was observed during the progress of other tests. There was no perceptible vibration noise on exhalation with either face piece. Test # 4 was to measure the effectiveness of the deflector tubes in clearing the eye pieces of moisture under different conditions of air temperatures. The device functioned perfectly with both masks. Test #5 measured comfort. All men with medium and large faces preferred the E3R135. Men with thin or small faces preferred the E3R111. Test #6 was to determine protection afforded men with large and small faces as the hose of the mask was kinked to shut off the air from the source. All men were successfully fitted with the E3R111. Two men with thin faces could not be fitted with the E3R135.

In 1935, the MII-VII-IIIA1 diaphragm gas mask was standardized. The mask had a MII elasticated head harness and an MII outlet valve. It also had an MII hose. MII Diaphragm had threaded lenses to make it easier to repair in the field. Early production MII diaphragm gas masks were made of red/brown gum rubber while late productions were made of black natural rubber. The MII Diaphragm masks were manufactured by Goodyear tire and rubber company. Goodyear also Manufactured a large majority of MIA2s As well. The MII Diaphragm gas mask was the last US mask to use a Canvas chin rest. The MII was issued only with the MVIII filter and MIIIA1 carriers. It is possible that extremely late productions could have had MIXA1 filters but it is unconfirmed. The Navy also used a variant of the MII Diaphragm. this variant was referred to as a MkII Navy diaphragm gas mask there are no differences between the two. A lot of MkII Navy diaphragm masks are found with MIII Coil spring head harnesses because the Navy preferred them over the MII Cloth head harness. The mask was issued with an anti-dim marked for Tissot type mask.

The MVIII is an OD green color and has the inlet valve located at the bottom. It has a curved elbow tube similar to the MIXA1 filter. The chemical filling is 80% granular impregnated charcoal type A and 20% (by volume) soda-lime granules. The outer body of the MVIII is longer than the MIXA1.

The MIIIA1 Is a Larger carrier compared to all other kidney Carrier Designs. In the MIIIA1 the Uniform curve at the Hose position has three straight lines. On the carrier is US the chemical warfare insignia with the origin of the size U For universal. This carrier was used both with the MIA2 Service and MII Diaphragm masks

Printed on the forehead is US for the country of origin and U For universal size. the lot number is printed on the side of the facepiece.

Last uses and packaging of the masks Edit

The mask was used up until 1944 when it was finally declared obsolete. The mask was stored in an MII tin because it kept the mask from dampness and from getting damaged. All masks were issued with E2R21 face forms to keep the facepiece from warping in storage. 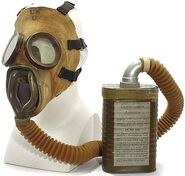 US soldiers drilling With different types of masks. One of them being a MII-VIII-IIIA1 Diaphragm gas mask

US soldiers training with permeable protective clothing with Different types of masks. Two of them being MII-VIII-IIIA1 Diaphragm gas masks

A close-up of a MkII Navy diaphragm gas mask 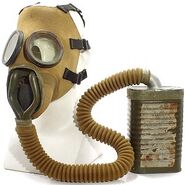 Front view of a MIIIA1 Carrier

Opposite side of A MIIIA1 Carrier

E2R21 Face for Only issued with MII Diaphragm facepieces

Opposite side of a E2R21 Face form

Close up of a MII-VIII-IIIA1 Diaphragm gas mask sealed in a MII tin Dated September of 1940
Add a photo to this gallery
Retrieved from "https://gasmaskandrespirator.fandom.com/wiki/MII_diaphragm_gas_mask?oldid=43389"
Community content is available under CC-BY-SA unless otherwise noted.